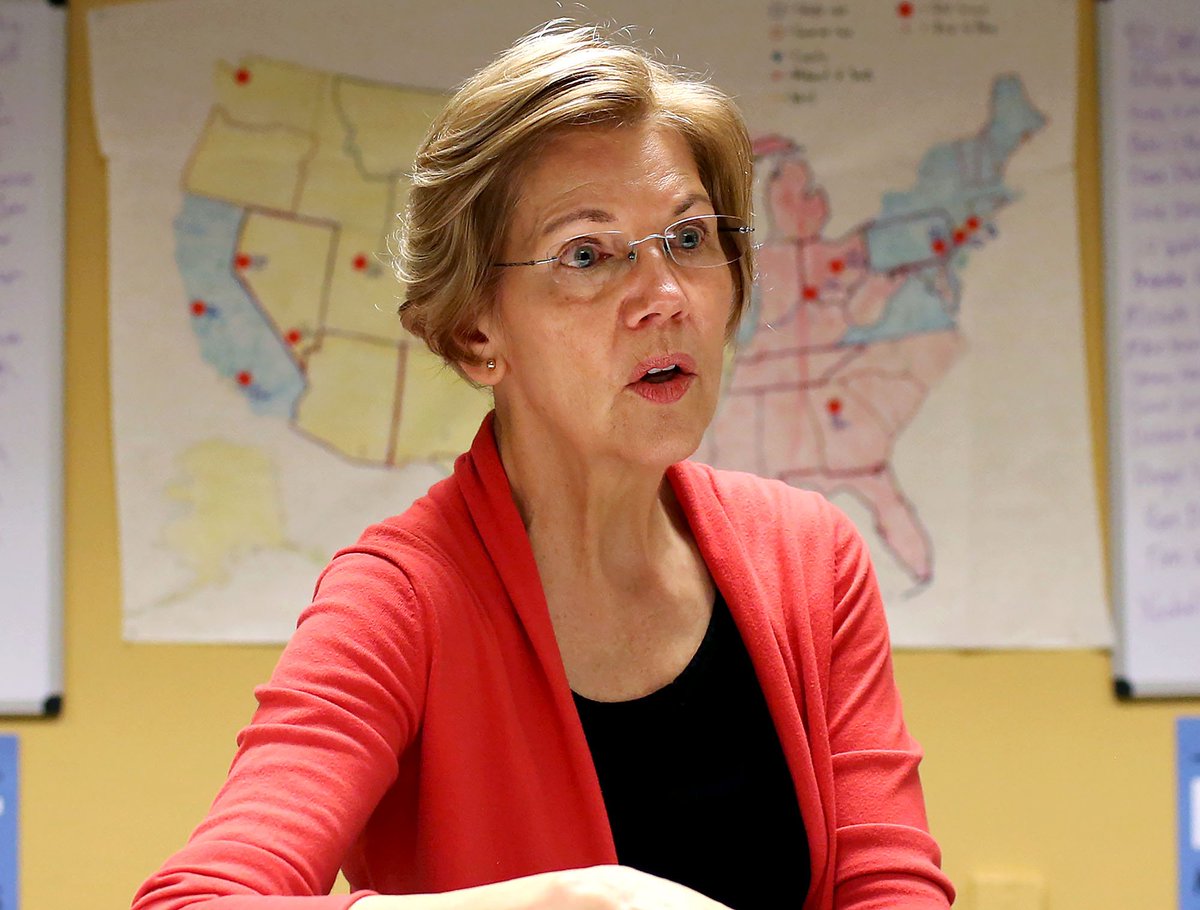 She's made herself a joke.

Even Bob Somerby's writing about how stupid Warren is.  He especially takes her on for her comments that Donald Trump is calling her mother a liar -- which Trump never said.  She has backed herself into a corner and she's not going to be able to get out unless she can get honest.

Charlie Kirk‏Verified account @charliekirk11 Oct 16
Only Donald Trump could get Elizabeth Warren to publish her own ancestry results proving she is less Native American than the average white American while also having her continue to pretend she’s Native American despite tribes denouncing her
1,060 replies12,153 retweets40,461 likes

And her remarks were much worse than most of the press is allowing.

This is her reality and will be for the next few years.  I don't think she can run for president now.  She might not even be able to stay in the Senate.

Wednesday, October 17, 2018.  Days away from the Women's March on the Pentagon and GE makes a killing off war yet again.


This weekend is the Women's March on the Pentagon.

After months of planning, the Women’s (and others) March on the Pentagon is one week away!

Despite the fact that our children are getting third rate public schooling; homelessness is a national crisis and disgrace; U.S. infrastructure is failing at an alarming rate; and this nation is being dissolved foot by foot by global warming and unprecedented natural disasters: the Pentagon receives almost .60 of every tax dollar to continue the war machine’s program of global domination for resource control and profit.

We at WMOP reject the thinking that just because the U.S. has long been the world’s dominant hegemonic force, that it has to remain that way. Maintaining the U.S. war machine at its current levels is sucking the life our of our families, communities, nation and world.

Imperialism is the disease and Women organizing in a dedicated and militant (we won't stop until they stop) way for a peaceful and sustainable planet is the answer!

Lead organizer Cindy Sheehan had this to say from her home in California, “Without curing the disease of Imperialism, the symptoms of racism, sexism, and other endemic (to the U.S) violence will never stop.”

From the Boston area, co-lead organizer Bonnie Caracciolo added, "All power to the people."


Join Us!
SCHEDULE OF EVENTS

Now this action isn't for everyone.  Some people, for example, just don't believe in peace.  A lot of those work for the so-called news channels of basic cable.  At THIRD, we did "10 reasons to avoid Women's March on the Pentagon" to explain why some people might not attempt to participate:

1) You're just about to explore adult diapers in your NCIS Jethro fan fiction.


2) You'd rather spend your time pulling the wings off butterflies.


3) You're a War Criminal and know you won't be welcome.


5) You don't feel that The PATRIOT Act went far enough.


6) The tattoo on your arm reads "Thin the heard" and the one above your ass crack reads "Time for a culling."


7) Someone's got to fill the front row at that Kid Rock concert in Atlantic City.


8)  The Northern California Renaissance Faire in Hollister is taking place and you were really hoping to attend and, fingers crossed, score with your second cousin.


9) Someone has to stay home and watch THE HALLMARK CHANNEL's 2018 COUNTDOWN TO CHRISTMAS PREVIEW.


10) You're attending a dinner party thrown by Michelle Obama and Bully Boy Bush where the theme is Learning To Love The Destroyers.

But if you can't select a reason from the ten above, the Women's March on the Pentagon takes place this weekend, October 20-21.

The Iraq War continues.  And while many are dead and injured as a result, remember that big business has made a killing.


You could make a killing.  And General Electric has.  MARKETWATCH notes this morning, "The Iraqi government will give a $15 billion power-generation contract to General Electric, rather than to rival bidder Siemens AG, the FT reports, citing unnamed sources."

Why do US troops remain stationed in Iraq?  Because big business wants to make big money in Iraq.


As Smedley Butler wrote in his 1935 book WAR IS A RACKET:


I spent 33 years and four months in active military service and during that period I spent most of my time as a high class muscle man for Big Business, for Wall Street and the bankers. In short, I was a racketeer, a gangster for capitalism. I helped make Mexico and especially Tampico safe for American oil interests in 1914. I helped make Haiti and Cuba a decent place for the National City Bank boys to collect revenues in. I helped in the raping of half a dozen Central American republics for the benefit of Wall Street. I helped purify Nicaragua for the International Banking House of Brown Brothers in 1902-1912. I brought light to the Dominican Republic for the American sugar interests in 1916. I helped make Honduras right for the American fruit companies in 1903. In China in 1927 I helped see to it that Standard Oil went on its way unmolested. Looking back on it, I might have given Al Capone a few hints. The best he could do was to operate his racket in three districts. I operated on three continents.

In other news, the administrator of USAID Tweeted the following:

.@USAID continues to expand aid to religious minorities in Iraq to preserve Iraq's cultural mosaic & promote pluralism. We support those who work for a peaceful, diverse, and prosperous #Iraq

Green is supposed to meet with Cardinal Raphael Sako and it should be an interesting meeting.  Ines San Martin (CRUX NOW) reports:

According to the head of the Iraq-based Chaldean Catholic Church, the United States government has done nothing to aid Christians in Iraq while the US State Department is touting hundreds of millions in aid for Christians and other minorities in the country.
“Americans are very nice and very friendly as individuals, but their policy is wrong,” said Cardinal Raphael Sako, Patriarch of the Chaldean Church on Tuesday. “There are promises, but until now, there’s nothing [from the U.S. government] to help these people return to their homes.”
[. . .]
On the U.S. policy, he said he doesn’t understand why they help one regime change into another, “or why do they keep killing people?” He also floated a few questions that he left unanswered, such as “who’s financing [Islamic terrorist organization] ISIS that has decimated Syria and Iraq and forced millions to flee their homes.”
“Why are there 3.5 million Iraqis outside of their homes? Who will restore Iraq’s normality? This is a big political responsibility. The policy is not only looking for political interests but also to respect human beings,” Sako told reporters at an encounter on the margins of the Oct. 3-28 Synod of Bishops on Young People, the Faith and Vocational Discernment.

Meanwhile, IRAQ NEWS reports that a new resolution being worked on by the Parliament would require the removal of all foreign troops from Iraq -- even those hidden under the terms "for advice and training."  Work on the resolution is being led by Moqtada al-Sadr's bloc.  The Shi'ite cleric and movement leader wields great influence in Parliament as a result of his bloc coming in first in the May 12th elections.


Meanwhile, a number of people on Twitter are noting Moqtada's open letter to US President Donald Trump.


Could Moqtada be the one who forces the removal of US troops from Iraq finally?

Someone needs to and we all know the Democrats in Congress didn't do it -- despite promising us they would.

Princess Lauren‏ @alissa914 6m6 minutes ago
Replying to @SueGlashauser @pullenpoynt1 @SenFeinstein
Unfortunately, the Dems are more spineless... remember when they got the super majority in Congress by saying they wanted to end the war in Afghanistan and Iraq and didn't stop either...then passed the watered down ACA and got voted out of office for not doing what they promised?
0 replies0 retweets0 likes

Why the Women's March on the Pentagon?  To call an end to never-ending wars.  To address the money the government steals from the people to pay for these wars.  To show solidarity with the people of the world targeted by the US government?  These are only a few solid reasons.

Women’s March on the Pentagon‏ @WomenMarch4Paz 21h21 hours ago
Join us this weekend! Stand up for #peace and against war and imperialism! #WomenRise4Peace
1 reply9 retweets8 likes

Eleanor Goldfield‏ @ActivistEleanor 2d2 days ago
This Saturday & Sunday, join me and many others in marching, rallying and planning against the military industrial complex - both here and abroad. @WomenMarch4Paz

Jesse Ventura‏Verified account @GovJVentura 2d2 days ago
The U.S. is a war economy. We continually spend our money on useless things for the war machine, which we’re now bringing to space. Can privatization of the space industry save us from bringing the world to war? #mondaymotivation #mondaymorning [WATCH] youtu.be/wvC9-TiF9hU

Women’s March on the Pentagon‏ @WomenMarch4Paz Oct 14
Join us at the Pentagon on October 21st. Hear from @Green42020 and others as we call for an end to the bipartisan war machine. #WomenRise4Peace marchonpentagon.com/march