Jimmy Dore, teachers stressed out during the pandemic

We're all under stress as the pandemic continues. I know a and I know that this includes healthcare workers (like my mom). I saw Kavitha Cardoza (ALL THINGS CONSIDERED) report and wanted to share from it:


To say Leah Juelke is an award-winning teacher is a bit of an understatement. She was a top 10 finalist for the Global Teacher Prize in 2020; she was North Dakota's Teacher of the Year in 2018; and she was awarded an NEA Foundation award for teaching excellence in 2019.
But Juelke, who teaches high school English learners in Fargo, N.D., says nothing prepared her for teaching during the coronavirus pandemic.
"The level of stress is exponentially higher. It's like nothing I've experienced before."
It's a sentiment that NPR heard from teachers across the United States. After a year of uncertainty, long hours and juggling personal and work responsibilities, many told NPR they had reached a breaking point.
Heidi Crumrine, a high school English teacher in Concord, N.H., says this has been the most challenging year she has ever encountered in her two decades of teaching.
"And I say [that] as someone who started her first day of teaching on 9/11 in the Bronx in New York City."

The stress has to be mind boggling. I think every day for a teacher would be stressful but when you add COVID on top of that? It's got to be even worse.

Tuesday, April 27, 2021.   Fall out from Saturday's injustice continues in Iraq, Moqtada al-Sadr makes an alliance, is the Australian government doing anything at all to assist an Australian citizen imprisoned in Iraq, and much more.

Saturday, a fire broke out at  Ibn al-Khatib Hospital in Baghdad, ignited when an oxygen tank exploded.  As noted in yesterday's snapshot, the death toll of 82 would likely increase.  Sura Ali (RUDAW) reports:

The death toll of a massive fire that ripped through Baghdad’s Ibn al-Khatib Hospital Saturday night has risen to around 130, according to Iraq’s human rights commission.

A report released following a fact-finding mission by the government-funded Iraqi High Commission for Human Rights reports a higher number of casualties than the government’s previous toll, on Sunday, of 82 deaths. It notes that many of the bodies have yet to be identified due to being burned beyond recognition.

The commission has found that the fire started after an oxygen cylinder exploded in a patient wing crowded with visitors. They say the number of people allowed in the space is evidence of the hospital’s failure to abide by the instructions of the ministry of health.

Fire extinguishing equipment present in the hospital was not used due to people not being aware of where it was stored, it says, also noting that many patients were rescued by companions and family members, rather than civil defense teams.

Widespread negligence on the part of health officials is to blame for a fire that ripped through a Baghdad hospital, Iraq’s prime minister, Mustafa al-Kadhimi, said Sunday.

Following a special cabinet meeting to discuss the blaze, Kadhimi suspended Health Minister Hassan al-Tamimi — who is backed by the powerful Shia leader Moqtada Sadr — as part of a probe that also includes the governor of Baghdad.

The fire that killed more than 80 people triggered outrage on social media, with a widespread hashtag demanding the health minister be sacked.

The Hezbollah Brigades, one of Iraq’s most radical pro-Iran factions, on Sunday evening demanded that the government quit.

Kadhimi, in a tweet, urged Iraqis “to be united in solidarity and to refrain from playing politics with this national catastrophe.”

Prime Minister Mustafa al-Kadhimi ccame to power in May of last year.  Like all of the post-2003-invasion prime ministers, he pledged to end corruption.  He did not.  And now the same interests involved in the corruption that led to the loss of so many lives in Saturday's fire?  Mustafa needs their support if he's to remain prime minister  after this year's election.

Iraqi Shia cleric Moqtada Sadr has pledged to support Iraqi Prime Minister Mustafa al-Kadhimi for a second term, if the latter decides not to run a party of his own in the upcoming parliamentary elections.

An Iraqi political source familiar with the matter revealed to The Arab Weekly the existence of electoral understandings between Kadhimi and Sadr. According to these , the source said, the Sadrist movement will support the current prime minister  to remain at the head of the government in exchange for Kadhimi’s commitment not to form a party or a bloc and not to enter the parliamentary elections that are expected to take place this October.

The source confirmed to The Arab Weekly that these understandings are supported by Shia political forces represented by the former premier Haider al-Abadi and the head of the Wisdom Movement Ammar al-Hakim, as well as by Sunni forces represented by parliamentary speaker Muhammad al-Halbousi and Kurdish groups led by  the former president of the Kurdistan Region Masoud Barzani.

Moqtada is supposedly riding a new cusp.  Supposedly.  I don't believe it and there's nothing to back it up.  He's still out of power and still reviled.  He broke with the protesters in February of 2021 and then engaged in embarrassing behavior including making demands and issuing orders that were not just ignored, but openly mocked.  One example, in April of last year, he demanded that males and females not protest together.  He looked out of touch and that was before the mocking began.

Older people watched in amazement as he gave up his leadership role to throw a weeks long tantrum in public.  He hasn't recovered from that.  Equally true, the issue of corruption raised by the protesters?  Moqtada's got corruption issues of his own.  His base is in the Sadr City section of Baghdad which is a slum.  Which was a slum in 2003 and continues to be to this day.  He's delivered nothing for his cult.   And that became an issue on Arabic social media late last year.

If Moqtada is making deals to back Khadimi, that's only one more indication that Moqtada is not riding as high as he and his followers claim.

On the issue of the government, Catherine Pepinster (THE TABLET) reports:

Christians in Iraq will only be able to live safely and securely if religion is separated from the state, the head of the Chaldean Catholic Church has warned. According to Cardinal Louis Sako, the Christian community continues to suffer discrimination in a country that does not recognise Christians as citizens with full rights.

“We still have a problem with corruption and sectarianism”, he said, during a webinar hosted by the charity Fellowship and Aid to the Christians of the East. “We need a secular regime. In many Western communities this protects people. We need to focus on this strongly with political leaders”.

Cardinal Sako’s comments came in a wide-ranging conversation with Cardinal Michael Fitzgerald, with participants via Zoom from around the world. The discussion came just weeks after Pope Francis’ visit to Iraq, when Cardinal Sako accompanied him. It was a landmark visit, said the cardinal, with many Muslims in Iraq learning about the Pope, the Vatican and the Catholic Church for the first time through media coverage in the run-up to the visit. He said he believed that the impact of the visit was greater on Muslims than Christians.

“It changed the mentality of people. It touched the heart of all Iraqis, perhaps Muslims more than Christians because it was the first time they could hear and see the Pope. He came for all Iraqis. After years of destruction we heard a message of peace and fraternity”.

Amnesty International MENA has a thread on the hospital fire:

1. After the horrific #BaghdadHospitalFire at Ibn al-Khatib, we call on the
@iraqigovt
to bring justice to the victims, hold those responsible accountable & take steps to ensure this never happens again. A hospital must be a safe space for people battling for their lives. 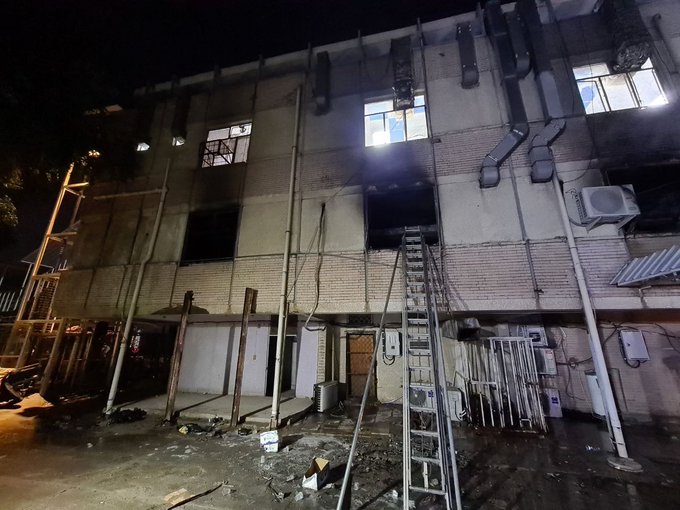 2. A thorough investigation is needed for accountability & to prevent negligence resulting in such a catastrophe. Iraq’s neglected healthcare system is grappling with being one of the worst hit by #COVID19 in the region. Comprehensive safety measures need to be put in place now!
9:38 AM · Apr 26, 202

3. Justice for the victims must also include immediate steps to prioritize #Iraq’s fragile health system, further debilitated by lack of adequate procedures to ensure safety of staff and patients. Investigations must lead to urgent change to ensure this never happens again.
9:38 AM · Apr 26, 2021

In other news, MEHR NEWS AGENCY notes yet another attack on a US convoy in Iraq:

Iraqi sources reported on Tues. that another US military logistics convoy was targeted in Al-Diwaniyah, the capital of Al-Qādisiyyah Governorate, and Babil Governorate, to become the third convoy targetted on the same day.

No further data has been released about the damages.

Does the Australian government ever do anything to protect its citizens?  They've done nothing to stop the persecution of Julian Assange.   Now they have a citizen in Iraq who's been tossed into a hole.  Steve Jackson (THE AUSTRALIAN) reports:

An Australian father of three has been able to speak to his family for the first since he was seized by Iraqi police and thrown in prison three weeks ago after being tricked into attending a fake business meeting with one of the country’s leading institutions.

Robert Pether, who grew up on Sydney’s north shore and attended Knox Grammar School, was arrested, along with an Egyptian colleague, when they arrived for an appointment set up by the Central Bank of Iraq in Baghdad on April 7.

The 46-year-old mechanical engineer had been in the country for about a week to try to resolve a contractual dispute between his Dubai-based building company and the bank over the construction of the financial institution’s landmark new headquarters which has been in the works for about four years.

Mr Pether’s wife, Desree, said he had spent a fortnight in solitary confinement after his arrest before being moved into a cell with his colleague and that she had only been able to talk to him for the first time since he was locked up on Tuesday night.

We'll wind down by noting this from Caitlin Johnstone:

This year has marked the first time ever that trust in news media dropped below fifty percent in the United States, continuing a trend of decline that’s been ongoing for years.

Mass media punditry is divided on where to assign the blame for the plummet in public opinion of their work, with some blaming it on Russia and others blaming it on Donald Trump. Others, like a recent Forbes article titled “Restoring Public Trust In Technology And Media Is Infrastructure Investment” blame it on the internet. Still others, like a Washington Post article earlier this month titled “Bad news for journalists: The public doesn’t share our values” blame it on the people themselves.

The one thing they all seem to agree on is that it’s definitely not because the billionaire-controlled media are propaganda outlets which manipulate us constantly in conjunction with sociopathic government agencies to protect the oligarchic, imperialist status quo upon which the members of the billionaire class have built their respective kingdoms. It cannot possibly be because people sense that they are being lied to and are fed up with it.

And actually it doesn’t ultimately matter what mainstream pundits and reporters believe is the cause of the public’s growing disgust with them, because there’s nothing they can do to fix it anyway. The mass media will never regain the public’s trust.

They’ll never regain the public’s trust for a couple of reasons, the first of which is because they’ll never be able to become trustworthy. At no point will the mass media ever begin wowing the public with its journalistic integrity and causing people to re-evaluate their opinion of mainstream news reporters. At no point will people’s disdain for these outlets ever cease to be reinforced and confirmed by the manipulative and deceitful behaviors which caused that disdain in the first place.