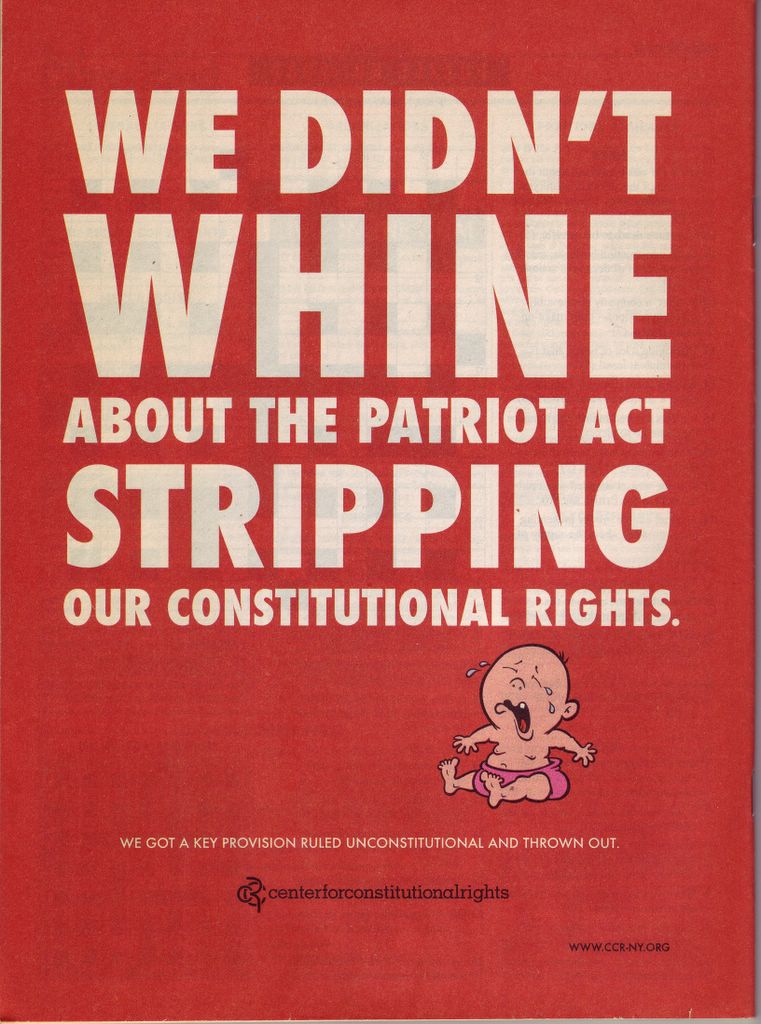 The ad to the left is for the Center for Constitutional Rights and it says:
"WE DIDN'T WHINE ABOUT THE PATRIOT ACT STRIPPING OUR CONSTITUTIONAL RIGHTS. WE GOT A KEY PROVISION RULED UNCONSTITUTIONAL AND THROWN OUT."
Thanks to C.I. for scanning and posting. The Center for Constitutional Rights is a tough organization that fights. You should know about them.


Pentagon Report Reveals New Iraqi Detainee Abuse
A newly released Pentagon study reveals that U.S. forces held Iraqi detainees for up to seven days at a time in cells so tiny that they could neither stand nor lie down. The cells measured four feet high, four feet long and twenty inches wide. One Iraqi detainee alleged his captors duct-taped his mouth and nose before placing him in the box-like cell. The Pentagon investigation also determined some Iraqi detainees were fed only bread and water for up to seventeen days during which time they were chained to the floor of their cells. Other Iraqis were stripped naked, deprived of sleep and assailed with loud music. The Pentagon report was completed in November 2004 but only made public last week in response to a Freedom of Information request from the American Civil Liberties Union. The report's author, Army Brigadier General Richard Formica, determined the troops used unauthorized interrogation methods that violated the Geneva Conventions. But he recommended that no U.S. troops be disciplined for abusing Iraqis.

That's the kind of press we have today -- it takes the ACLU to get the report from the government. I'm talking big-money media. Democracy Now! and other independnent media don't have the big bucks to toss around. (Maybe someday they will if we support our independent media. If you can't do it with money, do it by getting the word out.) But that's what it takes today, groups like the ACLU to stand up. (And do what corporate media won't.)

"Thousands of U.S. Troops Surround Ramadi"
Meanwhile thousands of U.S. and Iraqi troops have completely surrounded the Sunni city of Ramadi. New checkpoints were established on Saturday. The United Nations is reporting that nearly ten thousand residents of Ramadi have already fled the city fearing a Fallujah-like assault.

It's been almost two year since the November 2004 assault on Falluja. In that time, the American people have turned against the war. Will it make a difference or will we see a replay of Falluja with civilians slaughtered and kept from leaving the city?

I'm not offering much tonight. Rebecca said I could say she was sick and that she'll write about it tonight. So check that out. And if you read this and panic, it's . . . What do you say? It's a big deal but she's not dying so . . . I don't know what to say. I'm just sad tonight. (And was yesterday too.) She said on the phone that everyone was more upset than she was. I know she's tough but I also know there's a limit to toughness. Ruth had no idea and called to check in but Rebecca thought she knew and that's how Ruth found out about Rebecca and she's pretty bummed too. I could tell by this morning's entries at The Common Ills that C.I. was bummed too. Elaine and I talked about it on the phone tonight a long time, part of the reason that I'm blogging so late. She's going to be with Rebecca tomorrow when she goes to the doctor. C.I. was going to go as well but Rebecca says the flight is too long and it's no big deal and more people will just make her nervous. C.I. said, "Rebecca says that and then it's decipher whether she's saying that because she means it or because she's thinking, 'I don't want to put anyone out.'"

Chaos and violence continue.
ADDED: THE ASSOCIATED PRESS IS REPORTING "THE U.S. ARMY HAS CHARGED THREE SOLDIERS IN CONNECTION WITH THE DEATHS OF THREE IRAQIS WHO WERE IN MILITARY CUSTODY IN NORTHERN IRAQ LAST MONTH".
In Baghdad, Reuters notes two bombings, a "car bomb" at "a police checkpoint" resulted in three deaths and three wounded and a "sucicide car bomber" who killed at least four others and wounded at least ten. CBS and the AP note "[a] parked car bomb" that killed five and wounded nine.
The BBC notes: "Violence is continuing in Baghdad despite the introduction of stringent new security measures last week that have seen more than 40,000 Iraqi and US forces deployed in the city." Dahr Jamail reports on the days since Bully Boy's photo-op in the Green Zone and concludes: "Each passing day only brings the people of Iraq and soldiers serving in the US military deeper into the quagmire that the brutal, despicable, tortured occupation has become."
Bombings also took place outside of Baghdad. The AP notes that three people were killed in Fallujah when a roadside bomb exploded while another roadside bomb, in Hillah, killed at least person and wounded at least four others. Reuters notes that, in Najaf, one person died from a bombing while at least five were wounded.
Reuters also reports an attack in Karbala where "a senior police officer" was shot to death and two of his bodyguards were wounded. AP identifies the man as Abdel-Shahid Saleh and notes that Saadoun Abdul-Hussein Radi, electrician, was shot to death in Amarah.
Kidnappings? Reuters reports that the Mujahideen Shura Council, which most recently claimed credit for four of the seven Saturday bombings in Baghdad, is now claiming to be holding four Russian diplomats which, Reuters notes, appears to be a reference to the June 3rd attack. The attack resulted in the death of Russian diplomat Vitaly Vitalyevich Titov and the four who were kidnapped were identified by the Russian embassy as: Feodor Zaycev, Rinat Agliulin, Anatolii Smirnov and Oleg Feodosiev. AFP reports that the Mujahideen Shura Council is also claiming that it has the two US soldiers reported to have been taken by "masked gunmen" on Friday. AFP describes it as a body that "groups eight armed factions led by Al-Qaeda."
The US military has not confirmed the abduction of the two soldiers. AFP reports that their names have been released: "Kristian Menchaca, 23, and Thomas L. Tucker, 25."Richard A. Oppel Jr. (New York Times) reported that "more than 8,000" US and Iraqis are searching for Menchaca and Tucker and the AFP notes that seven US troops have been wounded since the search began Friday.
Meanwhile, CBS and AP quote Christina Menchaca, wife of Kristian, saying, "We're basically just watching the news because no one else knows anything about it, no one has heard anything about it."
On the American, Keith Maupin, who has been MIA since April 8, 2004, the AFP reports: "The Arabic news channel Al-Jazeera aired a video a week later that showed the American seated on the floor surrounded by masked gunmen. A month later it aired what it said was the execution of an American soldier, but the images were unclear and the army said it was inconclusive."
Al Jazeera is reporting that Iraq forces will be responsible for Muthanna relieving the British forces. This is the area that Japanese troops were also responsible for possibly adding creedence to the press coverage of the rumors that Japan will be announcing, prior to June 29th, that it is withdrawing all of its troops from Iraq. CBS and the AP note that Japan, England and Australia will "continue moving to "support role." The AP notes: "The decision, announced after [Nouri] al-Maliki met with Japan's ambassador, does not necessarily mean that any U.S.-led coalition forces will be withdrawn from Muthana province."
Ramadi? As noted by Sandra Lupien on KPFA's The Morning Show, "major military operations" continue as "helicopters and airplanes are flying over the town." Reuters reports that "seven tanks moved along Maarif Street and July 17 Street. Two explosions were heard but the cause was not clear." Ali Hussein Mohammed is quoted as saying: "The water is totally cut off. We have to go to the river to get water. There has been no water for 24 hours and we have no gas to boil the river water to drink it."
Meanwhile, in Italy, the AFP reports that prosecutors are saying that the US marine who shot Nicola Calipari should be put on trial. Calipari had been sent to Iraq by the Italian government to rescue kidnapped Italian journalist Giuliana Sgrena. Though he and Sgrena made it safely to the car, while traveling to the airport to leave Iraq, their car (or "caravan" in some reports at the time) was shot at by US forces. In the attack, Calipari was killed. Sgrena will be in New York City Friday June 23rd for an event with Amy Goodman at Columiba University. (Event starts at 7:30 p.m.)
Finally, Bully Boy is due to visit Vienna this week (Tuesday and Wednesday) and a group is attempting to organize a loud, if not welcoming, reception for him. "Bush Go Home" organizer Michael Proebsting tells the AAP: "The name George Bush, the name of the American president, has become a symbol for war crimes, for Abu Ghraib, for Guantanamo, for Jenin."