Natalie Wood sure knew how to rock a bikini #Babe #WCW 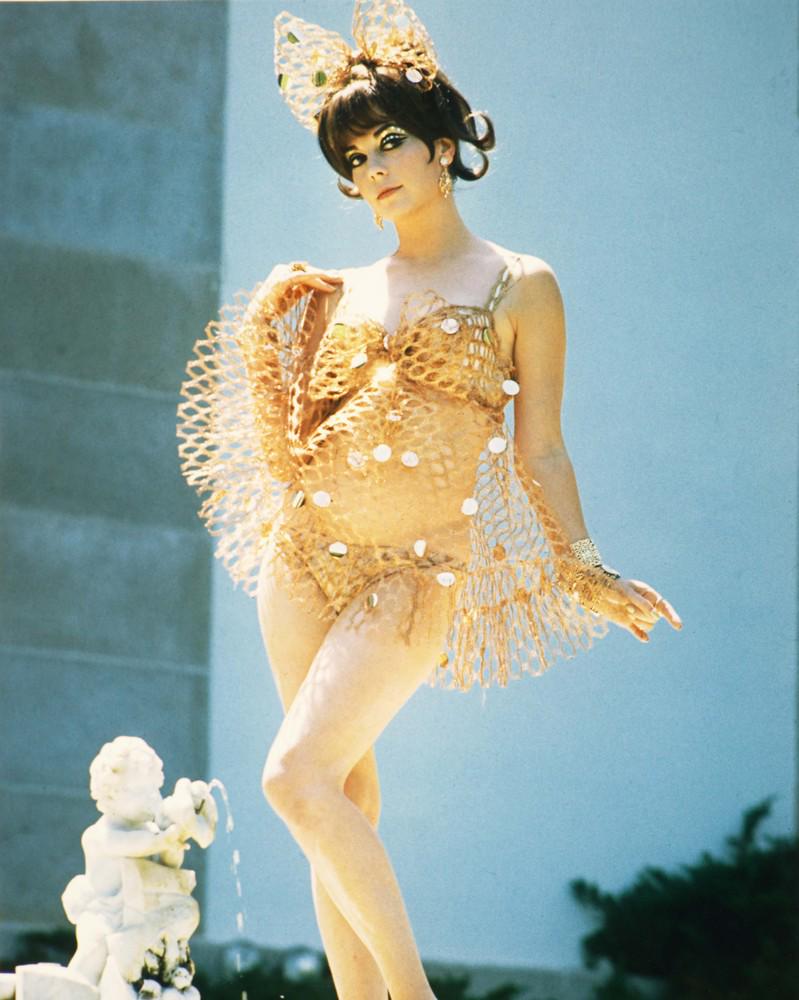 And Natalie Wood was a great actress.

2) Splendor in the Grass

The last one is overlooked but I think it's great -- and I love The Great Race among other Natalie films.  But Peeper is a classic waiting to be discovered.

Thursday, May 21, 2015. Chaos and violence continue, politicians continue lying about Iraq, Haider al-Abadi goes off on a whirlwind trip to Russia, Barack insists that the Islamic State is not winning in Iraq, and much more.

Throughout this week, I've repeatedly stressed that the only politician with a national profile who can tell the truth on Iraq is former Senator Mike Gravel.  No one else can.

Former Senator Ernest F. Hollings comes along to prove that, while a train can whistle, a politician can only lie.

"Why America invaded -- and failed in -- Iraq," finds Fritz name dropping ("my old desk partner, Joe Biden"), envious of other countries ("What does Mossad say about Iraq?") but mainly just lying.  Lying to himself and others.

Fritz insists he was against the Iraq War . . . before he was for it.  See speaking to then-Secretary of Defense Donald Rumsfeld, sharp as a tack Fritz noticed Rumsfeld didn't answer him when he asked Donald, "What does Mossad say about Iraq?"  So Fritz knew he had to vote against the 2002 war on Iraq resolution.  Bully Boy Bush goes on TV making the case for starting war without provocation by declaring, "We cannot wait until the smoking gun is a mushroom cloud."  Then Fritz "knew" (his term) that the CIA told Bully Boy Bush that Iraq had WMD.

How did he know it?

I think he spread his legs while Peatsy Hollings, noted music hater, whispered in the vicinity of his anus, "Real men start illegal wars."

That makes about as much since as anything else in his long lie of a column.

I remember debating a PNAC Resolution on Iraq in 1998. We finally agreed under Trent Lott, the Senate majority leader, to a resolution on Iraq by a voice vote so long as the last paragraph was worded: “Under no circumstance does this permit military action against Iraq.” At that time, we wanted to stir dissent and have Iraq headed for a democracy but under no circumstance invade.

Yes, in the world of civil disobedience, no one has done more than the US Congress.  He wanted "to stir dissent"?

And then they lie again.

It's a generational stupid on his part.

Fritz spends his retirement writing these columns and gets all excited when they're printed.  Not since Peatsy railed against the Prince-written Sheena Easton hit "Sugar Walls" has either spouse had an encounter with the modern world so many of us live in today.

Only an old fool who didn't grasp the internet would type that he voted for the resolution only after its last paragraph included "Under no circumstance does this permit military action against Iraq."

Only an old fool who didn't grasp the internet would type that claim.

It's not in the bill.


"Under no circumstance does this permit military action against Iraq"?

No, it's not in the resolution.

Well there was other action in the Senate, on Iraq, in 1998.

Maybe it was in another Iraq resolution?

Maybe his mind is gone?

Or maybe in real time Trent Lott put one over on him and tricked him into believing the phrase was in a bill on Iraq in 1998 when it wasn't?


Again, find me a politician with a national profile who's not lying about Iraq.  Other than Mike Gravel, you really can't.

US President Barack Obama's in the news cycle for his interview with The Atlantic where he declares of Iraq, "I don't think we're losing."

Does he understand the concept of losing?

He does.  He's still enraged, for example, that Bobby Rush kicked his ass in 2002.

And what's especially sad is he went on and on while campaigning for president (the first time) about how the answer wasn't to play "kick the can."  He was, he insisted, someone who took action and made decisions.

But his Iraq action is nothing but kick the can.

The whole point of his (minimum) three year action on Iraq that he started in mid 2014 was that he wouldn't be the one left holding the bag at the end.

So he grits his teeth and lies, "I don't think we're losing."

Jason Ditz (Antiwar.com) reminds, "Obama began the ISIS war after the fall of the city of Mosul to ISIS, and expanded the war to Syria in September. Since then, ISIS has increased its territory in Iraq, including taking virtually the whole of the Anbar Province, Iraq’s largest. They also hold over 50% of Syrian territory now."  AFP adds, "Even with sustained US airpower, many observers are skeptical the Iraqi army can win the war against the well trained and highly motivated Islamic State group."

The simple truth is that if Iraqis will not join together to fight for a united and peaceful country, there will be continuing conflict and chaos that potentially threaten American interests.
We should be debating how best to contain and minimize the threat. Further escalating the U.S. military role, I would argue, will almost surely lead to a quagmire that makes us no more secure. If the choice is go big or go home, we should pick the latter.


I'm glad Robinson's covering Iraq and I think a solid argument is made in his column.

But since Barack declared last June that the only answer for Iraq was a "political solution," maybe that should be factored in?

Specifically, the US government's refusal to aid the Iraqi government in working towards this or to use Prime Minister Haider al-Abadi's need for aid or weapons by demanding concessions from him to move the political process along.

We focus here on the mistreatment of the Sunnis very often because -- under Haider and Nouri al-Maliki before -- the Sunnis have been targeted with violence.  But let's not pretend that life's wonderful in Iraq for a Shi'ite civilian who doesn't hold office.

Robinson's correct that the Iraqi military collapses over and over.

But might that be due on some level to the fact that there's nothing in Iraq for the Iraqi people.

Billions of dollars flood in via oil sales but potable water remains a dream in Iraq.

You can't get out of the faucet.

You can boil your water on the stove before drinking it -- as many Iraqis do.

Where is the improvement in their lives?

Where is any indication that the government intends to serve them?

It's a government of exiles, hidden behind the walls of the Green Zone.

Who wants to risk, let alone give, their life for something like that?


Ramadi has fallen to the Islamic State but, not to worry, Iraqi Prime Minister Haider al-Abadi declares they have Ramadi surrounded and will soon retake it.

Of course, he made that statement not from Ramadi or even Baghdad.

Alsumaria reports he also declared that some foreign powers called on him not to go to Russia.


Who could he be speaking of?

It's highly doubtful Iran has any problem with his visit to Russia.

Who could that be?

And did they encourage him to not to go to Russia?

No one knows based on the public record but Haider clearly wants to stand on the national stage and imply.

This right after he's gotten US President Barack Obama to hastily deliver missiles.  BBC News reports, "The US military says it is sending 1,000 anti-tank missiles to the Iraqi government following the fall of Ramadi to Islamic State (IS) forces."  Missiles, which, no doubt, the Iraqi military and militias will leave on the ground of a contested city as they rush to flee (based on past performance).

So off he goes to Russia and insults the US.

No doubt, he'll rush to clarify that he was speaking of a super power, but not the US.  He meant this other super power, one that no one's ever heard of and that he can't, of course, name.

Should he be in Russia today?

In the Iraqi press for the last three weeks, one report after another has featured one Iraqi official after another insisting that Iraq needed to secure an alternative country for weapon supply.

So you could argue that this visit was needed.

But even if you argued that, it's still difficult to argue that Haider himself should be out of the country glad handing when the still-not-on-the-run Islamic State is seizing more areas.


Of course the visit wasn't just about weapons, it was also about oil.  Alsumaria notes that, while in Moscow, Haider met with the heads of Soyuz Group Oil and Gas, LUKoil and Gazprom.


Meanwhile, Iraqi Spring MC notes that the Iraqi Center for Documentation of War Crimes is stating they will file an appeal with United Nations Secretary-General Ban Ki-moon over the actions of the militias and Baghdad's SWAT forces as well as the indiscriminate shelling which has injured and killed thousands of Iraqis.


The bombing of Falluja's residential neighborhoods carried out by the Iraqi government and now having existed for 16 continuous months -- leaving many civilians wounded or dead.

September 13, 2014.  That's the day Haider stood before the press and proclaimed that these bombings (which are War Crimes) were over.  No more.  He had stopped them.

And Haider's off in Russia when he needs to be seeing that his (empty) promises are kept.

More weapons -- from the US and from Russia -- are not the answer to the political crises in Iraq.

antiwar.com
jason ditz
margaret griffis
Posted by Mikey Likes It! at 3:45 AM