Are you tired of hearing the media obsess over Donald Trump's idiotic joke? 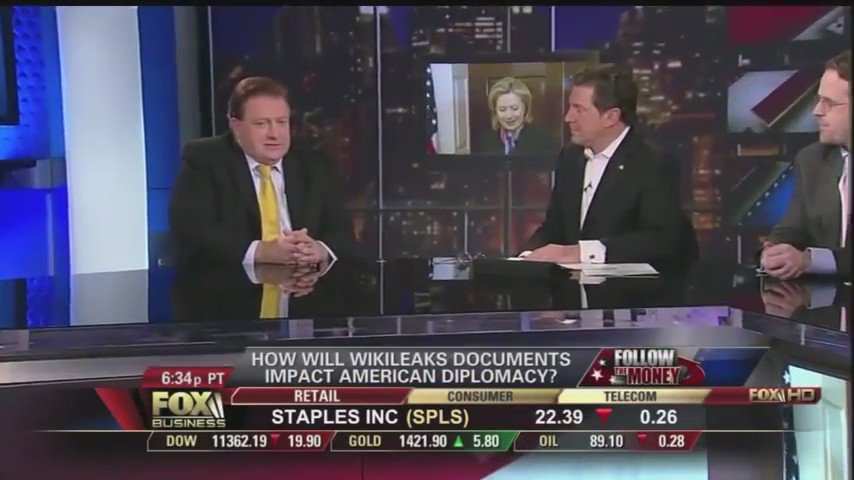 
But it's okay for her boy Bob to call for the assassination of Julian Assange?

She's such a hypocrite and liar.

You have to read Eric Draitser's latest at COUNTERPUNCH:

As White House documents from the Clinton administration revealed, Hillary was one of the principal salespeople for NAFTA, going so far as to speak at a confidential White House briefing on NAFTA in November 1993, just a few days before it was approved by Congress. The documents also prove the fact that Hillary was, as John Nichols wrote in The Nation in 2008, “the featured speaker at a closed-door session where 120 women opinion leaders were hectored to pressure their congressional representatives to approve NAFTA.”
Clinton lobbied for NAFTA all throughout the halls of power in Washington, but also before the American people on television and in the major media. In short, NAFTA can be seen as one of Hillary’s crowning achievements; heavy is the head that wears such a crown.
Hillary the Hypocrite
Today Hillary Clinton shamelessly presents herself as a friend of working people. She trots out the elites of organized labor, concerned primarily with their own positions atop demoralized and fragmented unions, and trumpets their endorsements of her. And even these working class backstabbers have to grit their teeth and smile as they kneel before the high priestess herself in hopes of eight more years of privileged relations and fine dining.

But behind closed doors, everyone in America who even casually follows politics knows the truth: Hillary Clinton is a crusader for free trade and neoliberalism.

She brought us NAFTA alright.


Wednesday, August 10, 2016.  Chaos and violence continues, newborns dead in Baghdad, Sunnis continue to be persecuted, Mika and MSNBC obsess over a dumb joke Donald Trump told, Jill Stein gears up for NPR, and much more.

Starting with US presidential politics: 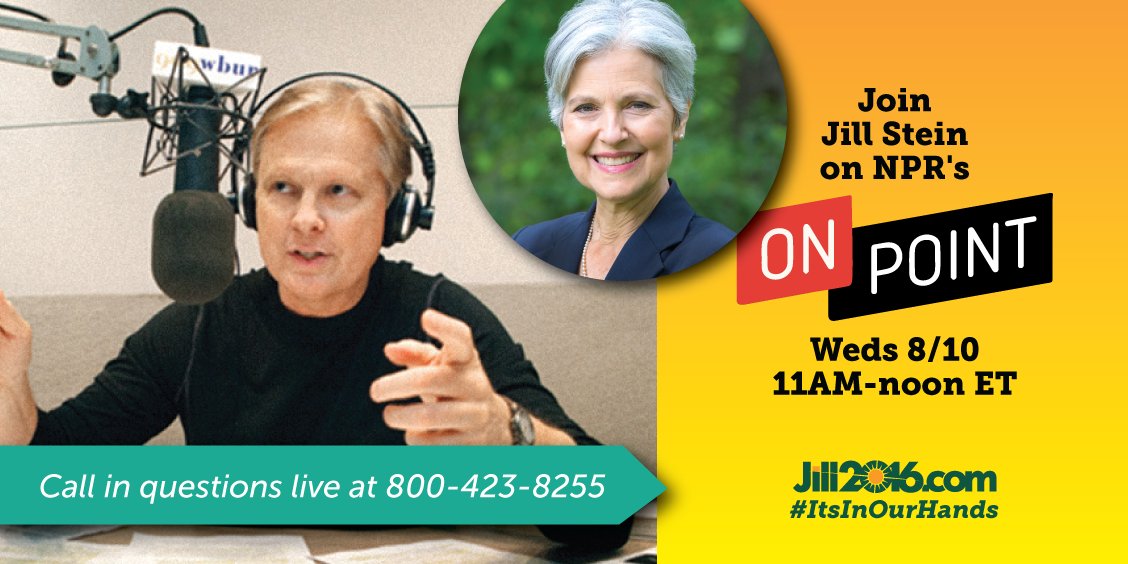 And then they moved on with the other gossip of the day.

Contrast that with Mika who wets herself on air as she pouts, fumes and insists Donald Trump must drop out of the race.

He's crossed a line, she said, shifting uncomfortable in her soiled undergarments.

Maybe we could all just say the joke was "unfortunate and had no place in the campaign"?

That is what Barack's campaign went with in 2008 when Hillary's remarks were interpreted as her calling for him to be killed.


Of course, the difference there was that Hillary was dead serious.  She wasn't joking.


As Anne E. Kornblut (WASHINGTON POST) explained back then,  "Her advisers quickly explained that Clinton merely intended to note that this was not the first primary campaign to stretch into the summer, not to suggest that Obama might be assassinated. Clinton later apologized to the Kennedy family while speaking to reporters, saying she did not mean to offend anyone."

Again, the difference was that Donald Trump was joking.

As Mika and the other fools on MSNBC grab the vapors every five seconds, they look more and more like caged fools and less and less like even TV hosts -- let alone the journalists they pretend to be.

(And they're not journalists.  They host talk shows.  Andrea Mitchell's MSNBC appearances only argue for why she should no longer be able to report news.  She reveals she's not impartial daily on MSNBC.)

Mika really needs to seek professional help about her inability to get through a morning without exploding over the tiniest and most unimportant details of the day.

She seems to have an addiction to on air rage and it's very unprofessional.

Even more so when you remember the construct of the show is Mika as den mother reigning in the rowdy 'boys.'

But it lets her vent over her failed life -- MSNBC was the highest she could make it?

And only as a third or fourth banana?

After all her father did to promote war and conflict -- basically birthing the modern Afghanistan War all by himself -- and the best GE could do for her was this?

She is blond and she is pret -- Well, she's blond.

And the thought of her ever progressing anywhere is as hilarious as when her father went running through the Carter White House in a panic convinced that Fidel Castro had sent a box of exploding cigars.

The House of Brzezinski -- an asylum for the deeply, deeply inbred.

Carl Nyberg ‏@CarlNyberg312  Jul 31
If you're supporting a candidate for President who supported #IraqWar, you don't get to scold people from a moral perspective.
6 retweets7 likes

AP reports 11 newborn are dead in Baghdad.  (Arabic outlets are saying 12.)  The children, all premature infants at Yarmouk Maternity Hospital, are dead after what the Ministry of Health says was an electrical fire.  AP notes, "A lack of fire escapes also contributes to the danger whenever a fire breaks out. There is also widespread failure by construction companies and those providing building material to follow accepted standards."  And AP's latest update brings the number killed to 12 as well.

Mika has no outrage to express over that.

Or over the freeing of the leaders of the League of Righteous.

The powerful commander of an Iran-backed Shiite militia in Iraq -- whom the U.S. freed after the kidnapping deaths of four American soldiers in 2007 -- has hinted that his fighters could blend in with Iraqi forces to kill Americans on the battlefield in Mosul.
Qais al-Khazali, leader of the paramilitary group Asaib Ahl al-Haq, "brags that he can wear any uniform in the Iraqi military, meaning that right now, his men are part of the Iraqi security forces that our men and women are training and advising. All he has to do is give the order," former military intelligence officer Michael Pregent told Fox News' Heather Nauert on "America's Election HQ" Monday. "He will return to violence, and he has American blood on his hands."

The militia commander told Reuters last month, "The Americans do not trust us because we resisted them during the occupation. There is no prospect (for cooperation)."

Well maybe you had your head up Barack's butt in 2009?

This morning the New York Times' Alissa J. Rubin and Michael Gordon offered "U.S. Frees Suspect in Killing of 5 G.I.'s." Martin Chulov (Guardian) covered the same story, Kim Gamel (AP) reported on it, BBC offered "Kidnap hope after Shia's handover" and Deborah Haynes contributed "Hope for British hostages in Iraq after release of Shia militant" (Times of London). The basics of the story are this. 5 British citizens have been hostages since May 29, 2007. The US military had in their custody Laith al-Khazali. He is a member of Asa'ib al-Haq. He is also accused of murdering five US troops. The US military released him and allegedly did so because his organization was not going to release any of the five British hostages until he was released. This is a big story and the US military is attempting to state this is just diplomacy, has nothing to do with the British hostages and, besides, they just released him to Iraq. Sami al-askari told the New York Times, "This is a very sensitive topic because you know the position that the Iraqi government, the U.S. and British governments, and all the governments do not accept the idea of exchanging hostages for prisoners. So we put it in another format, and we told them that if they want to participate in the political process they cannot do so while they are holding hostages. And we mentioned to the American side that they cannot join the political process and release their hostages while their leaders are behind bars or imprisoned." In other words, a prisoner was traded for hostages and they attempted to not only make the trade but to lie to people about it. At the US State Dept, the tired and bored reporters were unable to even broach the subject. Poor declawed tabbies. Pentagon reporters did press the issue and got the standard line from the department's spokesperson, Bryan Whitman, that the US handed the prisoner to Iraq, the US didn't hand him over to any organization -- terrorist or otherwise. What Iraq did, Whitman wanted the press to know, was what Iraq did. A complete lie that really insults the intelligence of the American people. CNN reminds the five US soldiers killed "were: Capt. Brian S. Freeman, 31, of Temecula, California; 1st Lt. Jacob N. Fritz, 25, of Verdon, Nebraska; Spc. Johnathan B. Chism, 22, of Gonzales, Louisiana; Pfc. Shawn P. Falter, 25, of Cortland, New York; and Pfc. Johnathon M. Millican, 20, of Trafford, Alabama." Those are the five from January 2007 that al-Khazali and his brother Qais al-Khazali are supposed to be responsible for the deaths of. Qassim Abdul-Zahra and Robert H. Reid (AP) states that Jonathan B. Chism's father Danny Chism is outraged over the release and has declared, "They freed them? The American military did? Somebody needs to answer for it."
No one ever has had to answer for it.

And it was a trade, check the archives.

The League talked about it to the press repeatedly.

And refused to release McMenemy for nearly two years claiming Barack hadn't kept all his promises to them.

He released the killers of American soldiers and he made deals with them.

Now they're telling Reuters they have no problem killing US service members sent to Iraq.

And because 9 billion US taxpayer dollars wasted on a failed 'plot' (let's stop calling it a "strategy"), the US Defense Dept announced yesterday:

Strikes in Iraq
Attack, fighter, and remotely piloted aircraft and rocket artillery conducted eight strikes in Iraq, coordinated with and in support of Iraq’s government:

-- Near Baghdadi, a strike struck an ISIL tactical unit.

-- Near Hit, a strike struck an ISIL tactical unit and destroyed an ISIL fighting position.

-- Near Qayyarah, a strike struck an ISIL tactical unit.

Task force officials define a strike as one or more kinetic events that occur in roughly the same geographic location to produce a single, sometimes cumulative, effect. Therefore, officials explained, a single aircraft delivering a single weapon against a lone ISIL vehicle is one strike, but so is multiple aircraft delivering dozens of weapons against buildings, vehicles and weapon systems in a compound, for example, having the cumulative effect of making those targets harder or impossible for ISIL to use. Accordingly, officials said, they do not report the number or type of aircraft employed in a strike, the number of munitions dropped in each strike, or the number of individual munition impact points against a target. Ground-based artillery fired in counterfire or in fire support to maneuver roles is not classified as a strike.


These daily strikes have been going on since August of 2014.

They do nothing to address the Iraqi government's persecution of the Sunni population.

No effort put into diplomacy.