Can't trust CBS but you can apparently turn to TMZ:


Hillary Clinton has "frequently" fainted due to dehydration, according to Bill Clinton ... but for some reason CBS removed that comment from its initial airing of the interview.
Charlie Rose sat down with the ex-Prez to discuss the candidate's health, and Bill tackled the question head-on. CBS released quotes from the interview where Bill said, “... because frequently -- well not frequently, rarely -- but on more than one occasion, over the last many, many years, the same sort of thing happened to her when she got severely dehydrated.”

The "frequently" part was edited out of Monday's evening news. What's interesting is ... it was left in when a longer version aired Tuesday on "CBS This Morning."

What CBS edited out was 3 seconds.

So, no, it was not about time.

Dr. Jill Stein ‏@DrJillStein  3h3 hours ago
Thanks to our friends in #Iowa for a wonderful visit to #DesMoines! #CancelStudentDebt #ItsInOurHands 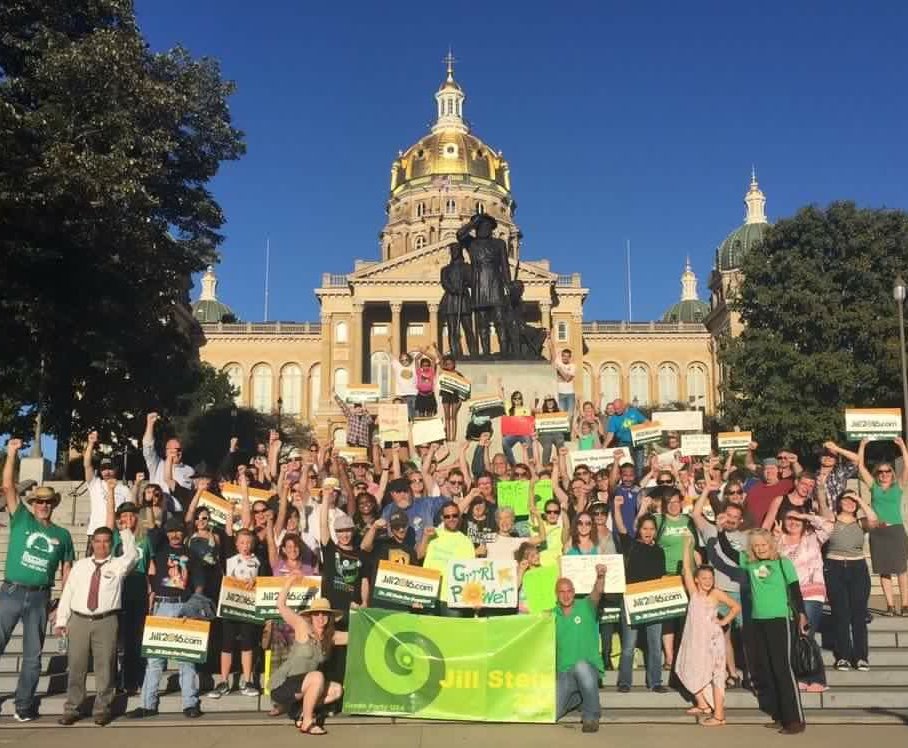 It's time to spend a little on the people of America.

We've certainly forked over a ton to the corporations.

Written by Dallas and:


The Third Estate Sunday Review's Jim, Dona, Ty, and Ava,
Rebecca of Sex and Politics and Screeds and Attitude,
Betty of Thomas Friedman Is a Great Man,
C.I. of The Common Ills and The Third Estate Sunday Review,
Kat of Kat's Korner (of The Common Ills),
Mike of Mikey Likes It!,
Elaine of Like Maria Said Paz),
Cedric of Cedric's Big Mix,
Ruth of Ruth's Report,
Wally of The Daily Jot,
Trina of Trina's Kitchen,
Marcia of SICKOFITRDLZ,
Stan of Oh Boy It Never Ends,
Isaiah of The World Today Just Nuts,
and Ann of Ann's Mega Dub.


Monday, September 12, 2016.  Chaos and violence continue, Hoshyar Zebari's problems finally get noted in the western press, Hillary Clinton has a health problem, and much more.


A weekend of stumbles has Hillary Clinton suddenly looking vulnerable at a pivotal moment of her battle with Donald Trump.
Her swoon Sunday at muggy Ground Zero -- and damaging video of Clinton lurching into the arms of her security detail -- dramatically turned the state of her health from conservative conspiracy theory into a genuine campaign issue.
The episode also exacerbates questions about transparency that have long dogged Clinton's White House bid after the campaign revealed the Democratic nominee is suffering from pneumonia -- a fact it kept quiet since Friday.


Conan O'Brien joked tonight (on TBS' CONAN) about rumors that Hillary Clinton was using a body double to conceal her health problems: "When Bill Clinton heard about it, he said, 'Man, I wish'."

Meanwhile, some of the efforts to spin for Hillary are getting really embarrassing.

Manumpkin SpiceLatte ‏@ManuclearBomb  10h10 hours ago
*on a date* Look, I really like you, but I hate that you supported the Iraq War and Drone Strikes so there is no us


Poor Amanda Marcotte, in 2007, it appeared she had a future.  Now she's exceeded her sell-by-date.

She crashed and burned and was let go from the John Edwards campaign -- she insists she jumped, she wasn't pushed.

John Edwards cheated on his wife who had cancer while he ran for his party's presidential nomination.

John Edwards had a mistress.

He had a child with this mistress.

While married to a woman battling cancer.

And while trying to become the president of the United States.

How awful a person do you have to be to be ejected from a John Edwards campaign?

And poor Hillary because Iraq will always be a problem for her.

It's not a good week to be Hillary.

Dr. Jill Stein ‏@DrJillStein  24h24 hours ago
Why'd Mideast dictators give big $ to #ClintonFoundation? For human rights, or to get US arms to crush dissidents?

Lots of big money flowing to the Clinton Foundation.

And lots and lots of money -- US tax payer dollars -- going overseas for never-ending wars in Iraq and Afghanistan.


Leo Shane III (MILITARY TIMES) reports, "The wars in Iraq and Afghanistan have cost U.S. taxpayers nearly $5 trillion so far, and that total could rise even higher in the years to come, according to new calculations released by independent researchers late last week."


There's no end to the Iraq War.

And last week at the NBC/MSNBC forum, Hillary promised more money to Iraq for warfare.

When does it end?

They should all be ashamed.

These have become never-ending wars.

They should all be ashamed.


We noted them August 28th:

Meanwhile entrenched politician Hoshyar Zebari may be in political trouble.

The long serving politician -- oft praised by Hillary Clinton -- is facing rumors of a no-confidence vote on Monday, RUDAW reports.


Were he to be voted out of office tomorrow, he would be the second cabinet minister in two weeks voted out -- last week the Minister of Defense was voted out of his post.


Iraqi politics are US politics . . .

No one loves Hoshyar more than Hillary Clinton -- if only she loved him enough to suggest he start The Zebari Foundation -- he could hide any millions in that.

Sunday, rumors appeared in the Iraqi press that Hoshyar's long reign might be coming to an end as a result of his corruption.

Oh, and also the Minister of Women.  Don't forget that.  He participated in Nouri's sexist and anti-woman government.


Iraqi politics are US politics.


All week long, Zebari's been the focus of talk throughout the Iraqi media about how (a) he's corrupt and (b) has stolen at least six billion from the Iraqi people.


Silence in the western media.


But what about the story we kept noting last week?

The one we kept noting that the western media was ignoring.

The former Minister of Foreign Affairs who was now the financial minister and who was accused of corruption?


Hoshyar Zebari, the Iraqi most praised by Hillary Clinton?

Iraq's national assembly is expected to vote today on whether veteran Kurdish politician Hoshyar Zebari can continue as the country's finance minister following a question-and-answer session with on August 27.


Zebari told Rudaw he is hopeful he will survive the possible vote of confidence in the deeply divided parliament and described the efforts to remove him from office as "politically motivated" and "without substance."


Does this mean that finally the western media may pick up on the story?


Finally, this week, the non-Arab and non-Kurd media picked up on the story.

Hoshyar Zebari should have been preparing for loan negotiations that could save his country from economic collapse. Instead, Iraq’s finance minister sat in his office waving a file of papers he claims prove that billions of dollars of state money was embezzled by rival politicians.

In the cauldron of Iraqi politics, Mr Zebari is battling on two fronts -- one to plug a gaping hole in government finances; the other to cling on to his job.

Wonder what other developments aren't getting reported on?


The US Defense Dept announced today:

Strikes in Iraq
Attack, fighter and remotely piloted aircraft conducted seven strikes in Iraq, coordinated with and in support of Iraq’s government:

-- Near Baghdadi, a strike engaged an ISIL tactical unit and destroyed a vehicle.

-- Near Ramadi, a strike engaged an ISIL tactical unit and destroyed a tunnel entrance and a checkpoint.

-- Near Tal Afar, a strike engaged an ISIL tactical unit and destroyed a vehicle.


When it is absolutely clear that all are out, I will weigh in.  We've long covered this story.  I'll share thoughts I've long tabled.


Over the weekend, community sites had a theme for posts -- best R&B song from the 80s or 90s and the choices were . . . Wally went with Diana Ross' "Take Me Higher," Cedric went with '"The Other Woman" (Ray Parker Jr.),'  Isaiah went with 'Now That You're Gone (Diana Ross),' Ann went with Diana Ross' "Workin' Overtime," while Trina went with Stevie Wonder and Diana Ross ("Skeletons" and "Dirty Looks"), Ruth chose Tina Turner's "Let's Stay Together," Stan went with Shirley Murdock's "As We Lay", Marcia picked Stacy Lattisaw's "Love On A Two-Way Street," Elaine selected Vanessa Williams 'The Right Stuff', Mike picked George Michael's "Fast Love," Kat chose Deniece Williams' "Silly," Betty decided on Vesta's "Congratulations" and Rebecca emphasized Shannon's "Do You Want To Get Away" in "fame is the luck of the draw."