Michael Tracey‏Verified account @mtracey  28m28 minutes ago
Who knew that it only took 3,000 Facebook ads to "undermine democracy"? Jefferson+Madison tremble in their graves at this existential threat 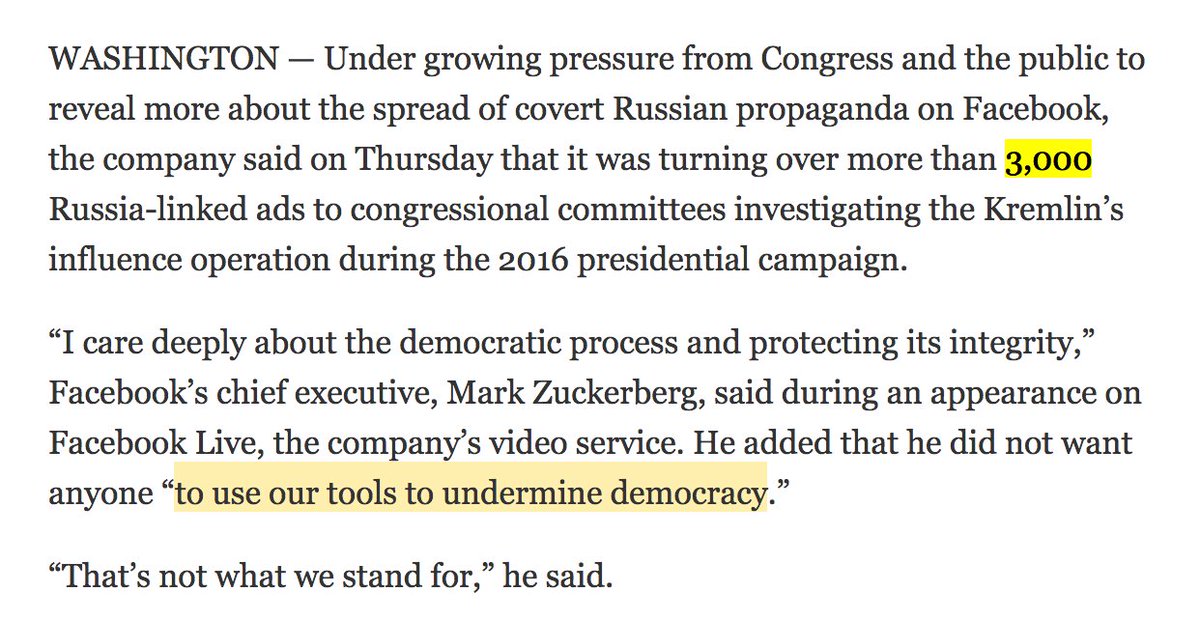 
No, I don't believe the elections were hacked.

But all these people clinging to this nonsense?

They better realize that means they blame Mark Zuckerberg.

He wants to be president.

They better remember this.

He doesn't deserve to be president.

Some good may come out of all this mindless hysteria if it blocks the big Zuck from becoming president.


In three days, the KRG and Kirkuk are scheduled to hold a referendum on whether or not they should remain a part of the Baghdad-based government.

As the vote looms, panic ensues among those opposed to the vote.

Denouncing the move are the foreign ministers of Iraq, Turkey and Iran.  The three elected to meet up in New York.  Tuvan Gumrukcu and Tulay Karadeniz (INDEPENDENT) type:

In a joint statement, the foreign ministers of the three countries voiced concerns that the referendum would endanger the gains Iraq has made against Islamic State, and reiterated their fears over the potential for new conflicts in the region.


How would a vote "endanger the gains Iraq has made against Islamic State"?

They repeat that fear over and over and no one ever asks them to define it.

The KRG and the Baghdad-based government do not get along and have not for years.

Has that prevented them working together in Mosul?

Why would this be any different?

But fear and the trash that peddles it always runs wild.

Let's play their game for just a second.  The Baghdad-based government manages to shut down the vote at the last minute, how does that help the struggle against ISIS?

Pressure Mounts on Iraqi Kurds to Cancel Independence VoteIn a region where few people agree on anything, neighbors and allies are pressing the Kurds to delay a vote they say could unleash violence.


The pressure has been going on for weeks now.  So far, the KRG has refused to buckle.


And the Baghdad-based government is in violation of the Constitution and has been for years.

There are three days until the vote is scheduled to take place.

During that time, something could happen.

At present, meaningless words have not helped change any minds.

But anything could happen over the weekend and this remains a huge global issue -- as the western media ignores it.

Kurds from around the world watch closely to see what will happen.  As Aaron Hess (International Socialist Review) observed in 2008, "Since the late 1970s, Turkey has waged a relentless war of attrition that has killed tens of thousands of Kurds and driven millions from their homes. The Kurds are the world's largest stateless population -- whose main population concentration straddles Turkey, Iraq, Iran, and Syria -- and have been the victims of imperialist wars and manipulation since the colonial period. While Turkey has granted limited rights to the Kurds in recent years in order to accommodate the European Union, which it seeks to join, even these are now at risk."

The referendum will be held as scheduled as no acceptable alternative has been offered, the High Referendum Council announced following a meeting on Thursday.

The High Referendum Council, headed by President Masoud Barzani, met on Thursday. In a statement released after the meeting, the Council reiterated that as time is running out and no alternative has been offered to replace the referendum and guarantee independence, the vote will be held on time.

The always useless UNAMI bowed yet again before the prime minister of Iraq and issued the following:

The members of the Security Council expressed concern over the potentially destabilizing impact of the Kurdistan Regional Government’s plans to unilaterally hold a referendum next week.
Council members note that the planned referendum is scheduled to be held while counter-ISIL (Da’esh) operations – in which Kurdish forces have played a critical role – are ongoing, and could detract from efforts to ensure the safe, voluntary return of over three million refugees and internally displaced persons.
Council members expressed their continuing respect for the sovereignty, territorial integrity, and unity of Iraq and urged all outstanding issues between the federal government and the Kurdistan Regional Government to be resolved, in accordance with the provisions of the Iraqi constitution, through structured dialogue and compromise supported by the international community. Council members expressed full support for UN efforts to facilitate dialogue between Iraqi stakeholders.


The Kurds will have independence one day.

When that day comes -- this year, whenever -- history is not going to look kindly upon all that stood in the way.

The US government claims to be about self-determination.

But it will have a very hard time explaining all the efforts to prevent the Kurds from independence.


ANADOLU AGENCY notes, "The [Turkish] parliament will hold an extraordinary session on Saturday to debate the extension of Turkish military’s operation in northern Iraq and Syria, according to ruling Justice and Development (AK) Party's parliamentary group deputy chairman."

The U.S. while releasing statements that it is against the non-binding independence referendum the Kurdistan Regional Government (KRG) plans to hold on Sept. 25, has deployed 1,700 troops to occupy Kirkuk, Iraq. The specially trained soldiers deployed in Erbil will work against the prevention of the referendum in Kirkuk. There are still 14,000 Peshmerga troops working for KRG President Masoud Barzani and former Iraqi President Jalal Talabani in Iraq’s oil center, Kirkuk. The United States’ occupation of Kirkuk is interpreted as preparing the region for an independent state which will be declared after the referendum.


Nearly a decade ago, the RAND corporation noted Kirkuk and the need for its status to be decided.  The longer this is postponed, the worse the situation gets.


And the price for the never-ending wars just keeps increasing.