Is this for real?

Talk about a bunch of capons.

They are a joke.

But so is our Congress which lets the president declare war.  And has done this for decades.

US House candidate, HI-2
The Constitution gives Congress the exclusive responsibility to declare war. The last time it did? 1941. Ever since, Congress has ceded this power to the President and it has cost us dearly. Support my resolution to end Presidential wars #HR922
32 replies403 retweets791 likes

And let's support Aaron Mate for trying to get the truth out when so many people just lie.

Aaron Maté‏Verified account @aaronjmate
1/ An illustration of why latest Dem handwringing over "sources & methods" is a joke. In 2017 (https://www.washingtonpost.com/graphics/2017/world/national-security/obama-putin-election-hacking/?utm_term=.3294b6d39b02 …) & 2018 (https://www.nytimes.com/2018/08/24/us/politics/cia-russia-midterm-elections.html …), the top 2 papers claimed CIA has sources deep in Kremlin. No Dem objected. Why? Cause those "sources" advanced Russiagate. 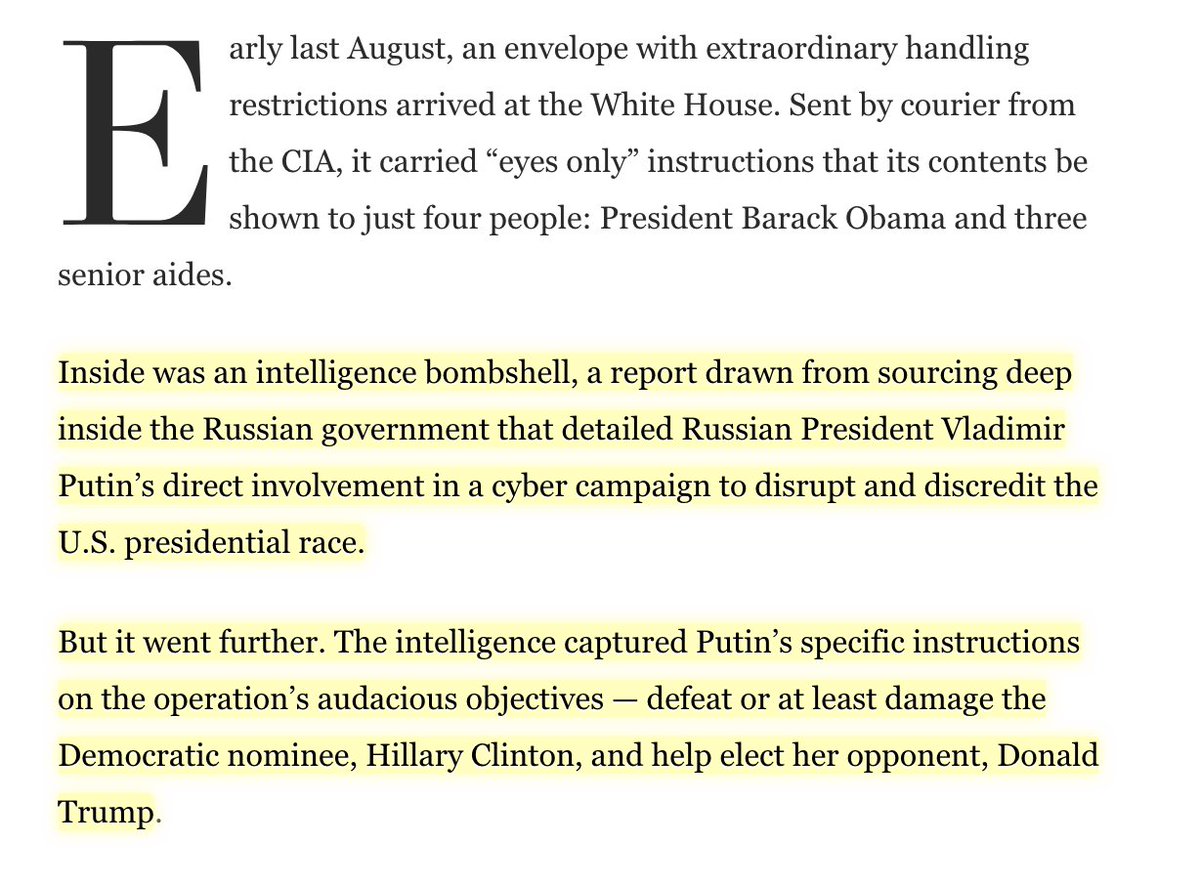 "We want to end the war and we want to end it now!"  Barack Obama spent most of the first half of 2008 yelling that at rallies as he sought to secure the Democratic Party's nomination.  Remember those days?

He clobbered Hillary Clinton over the head for her 2002 vote for the Iraq War.  Remember that?  Kimberle Crenshaw and so many others rushed forward to pile on.  Fair enough . . . if they gave a damn about Iraq but, as their actions have demonstrated, they didn't.


The US remains in Iraq.  So does, as RT AMERICA did a good job of pointing out yesterday, the United Kingdom.  And the two aren't the only foreign forces occupying Iraq.  For example,  Anna Whyte (TVNZ) reports:


The Government are extending New Zealand's military training deployments in Iraq and Afghanistan, as well as renewing three peacekeeping missions in Middle East and Africa.


The Prime Minister announced the extension today, with the Iraq deployment extended to June 2019 and reducing the number of military personnel from 143 to 121 from November this year.

Green co-leader James Shaw grilled the Minister of Defence about New Zealand's deployments to Iraq and Afghanistan on Tuesday afternoon, calling it a "seemingly never-ending military engagement".
It follows the Government's announcement on Monday it would extend the deployments until June 2019, despite Labour calling it "mission creep" in opposition.
Mr Shaw asked if the Minister agreed "that continued military involvement of outside forces has actually further destabilised the region and made it easier for terror groups to recruit and has led to an increase in violence rather than a decrease".

Most personnel are based at Taji Camp, but there are also three intelligence officers working out of Qatar.


Ms Ardern said the deployment will be reviewed again in early 2019, to assess New Zealand’s options to contribute to stability in Iraq beyond next June.


So New Zealand could keep troops in Iraq beyond June.  Apparently, no one ever leaves.  Also at Camp Taji?  Germany.  REUTERS notes:

German forces will be needed in Iraq for a long time to help rebuild the country’s military as it struggles to ensure that Islamic State militants do not regroup in underground cells, German Defence Minister Ursula von der Leyen said on Sunday.
Germany, which has about 125 soldiers in Iraq, is committed to supporting Baghdad as it rebuilds now that the fight to reclaim territory formerly held by Islamic State (IS)militants is largely over, she said during a visit to German troops at the Taji military base about 30 kms north of Baghdad.

And along with the military multitutdes, there are the mercenaries, the contractors.  Zack Kopplin and Irvin McCullough (DAILY BEAST) report:

The U.S. government has paid Sallyport Global, a military contracting company, over $1 billion since January 2014 to provide security, life support, training and other basic operations at Balad Air Base in Iraq. But the results, according to 17 current and former Sallyport employees, have been chaotic, bizarre, in many cases sinister, and posed major risks to the personnel on the base at a time when the so-called Islamic State controlled swathes of territory nearby.
Sallyport employs roughly 1,850 people at Balad. Its company headquarters is in Virginia, but it also has a corporate presence in Bermuda.
What Sallyport runs in Iraq is basically a small army of private military contractors, known in the trade as PMCs, recruited from around the world. Employees are paid handsomely to survive insurgent attacks, blistering heat and crushing boredom for a few years while supporting American international military and policy objectives.


As Barry Mann and Cynthia Weil explained decades ago:


Instead of getting out, the US government continues to occupy Iraq and attempt to control it.

Yerevan Saeed‏Verified account @YerevanSaeed
U.S likes to see Barham Salih as Iraq president. Salih has some rivals -- most compettive is Mala Bakhtyar. Salih has to officially agree to rejoin PUK Even if this happens, he has to convince KDP to support his bid for Iraq presidency. KDP sees Salih as more Iraqi than Kurdish
7:01 AM - 18 Sep 2018
1 reply1 retweet2 likes

What the hell has that piece of trash ever accomplished?  Selling the Kurds out to ExxonMobil?

More to the point, the position of prime minister has traditionally been reserved for a Chicken Ass Coward who fled Iraq.  Now the post of president will also go to such a person?

First, in 1979, Chicken Ass Salih fled to England.  Then he fled to the US following the Gulf War. When did he finally return to Iraq?

This is a president?

This is a coward.  This is an embarrassment.  From 1979 until the fall of Baghdad in 2003, he lived outside the country, cowering in fear, begging other countries to invade Iraq.

And that behavior is to be rewarded?

Recipe: Chicken Ass Coward Salih Salad
1) Check to ensure that all of Salih's bones have been removed (this is just a safety step, the spine was removed years ago).
2) Add corporate backing from his corporate masters such as ExxonMobil.
3) Stir in US backing.
4) Add a dash of empire and a touch of chauvinism.
5) Serve immediately because with Salih, as with all cowards, there's a huge chance he'll flee quickly.


The US government repeatedly backs the weakest and most controllable Iraqis.  It's not interested in an independent Iraq.  That's why they backed the weak Hayder al-Abadi.  They installed him in 2014.  Then they backed his weak ass over and over.  The Iraqi people didn't back him.  They saw him as the failure that he is.

For example, Iraq is facing a huge water crisis.  The US press never wanted to tell you that, but it is reality.  And Hayder had four years to address it but did nothing.

Even now, the US press tries to pretend that Hayder was something to admire.  Nabih Bulos (LOS ANGELES TIMES) maintains:

It was only a few months ago that Haider Abadi, Iraq’s avuncular prime minister, seemed to do no wrong.


He had been credited with defeating Islamic State, among other accomplishments, and was expected to easily net a second term in parliamentary elections in May. He had the backing of the U.S. and others in the West. He looked to be Iraq’s first genuinely post-sectarian leader.
In Arabic, Nabih means "intelligent."  Apparently, in THE LOS ANGELES TIMES, Nabih means "liar."  Hayder did nothing but wrong and only an apologist for imperialism would pretend otherwise.  Hayder came to office with Nouri al-Maliki bombing residential homes in Falluja -- a legally defined War Crime.  And Hayder insisted, in September (2014) that he was stopped these bombings because they were wrong.  It made for headlines in the western press.  But the reality, as opposed to the presstitution, was that the very next day, these bombings continued.

Nabih lies that he stopped the Kurds.  Stopped them from doing what?  Holding their non-binding measure?  They held it.  The Kurds want their freedom and independence.  And it will happen.  It will probably have to wait until the US finally leaves, but that it the future.  Hayder stomped his feet and threatened but he didn't stop the referendum.

He did not end the Islamic State.  Only US presstitutes ever believed that lie.  The US and Iran were part of the operation and the operation was not a success, it was a War Crime.  As Carl Boggs notes at INFORMATION CLEARING HOUSE this week:


It is easy to forget that it was the Obama administration that planned and carried out the first phases of the Mosul operation (begun in October 2016) which produced hundreds of thousands of casualties (with at least 40,000 dead), left a city of two million in Dresden-like state of rubble, and drove nearly a million civilians into exile. The same fate, on smaller scale, was brought to other Sunni-majority cities in Iraq, including Ramadi, Tikrit, and Fallujah (already destroyed by U.S. forces in 2004). Whatever the official goal, and however many secondary collaborators were involved, these were monstrous war crimes by any reckoning.

The Iraq War continues, the death and destruction continues.  The politicians aren't really that interested -- certainly not interested enough to end it.  Women's March on the Pentagon next week is about ending the wars.


Interview of Women’s March On The Pentagon founder Cindy Sheehan

The Green Party US and others have endorsed the #WMOP and HRGP gets a shout out from David Cobb WMOP: Oct 20-21st, Washington DC marchonpentagon.com #People #Planet #Peace facebook.com/story.php?stor…
0 replies0 retweets1 like

Chicago Committee Against War and Racism‏ @NoWarNoRacism Sep 13
This Sunday, September 16th, Join FURIE-Feminist Uprising to Resist Inequality and Exploitation to grow the Anti-War Movement in Chicago! This is a follow-up/planning meeting for the Women’s March on the Pentagon on Oct. 21, 2018 in Washington DC. bit.ly/2CTyVv1
1 reply1 retweet0 likes

Bonnie Caracciolo‏ @Green42020 17h17 hours ago
Visit for up to date i. marchonpentagon.com
0 replies0 retweets0 likes

Veterans For Peace‏ @VFPNational Sep 17
The Women's March on the Pentagon encourages all those opposed to endless war to write #LettersToTheWarMachine, during our "Why I Oppose War" campaign. The Pentagon's lust for endless war takes a heavy toll on the daily lives and the... marchonpentagon.com/letters
0 replies15 retweets21 likes

Bonnie Caracciolo‏ @Green42020 Sep 16
Bonnie Caracciolo Retweeted Caleb T. Maupin
Good question! @calebmaupin We ask it a dozen times an hour. When did working for an end to armed hostilities become a wrong goal? Like wishing for a sunny day is a crime, right? marchonpentagon.com @WomenMarch4Paz @masspeaceaction @answercoalition
Bonnie Caracciolo added,
Caleb T. Maupin @calebmaupin
Pro-war leftists call me “#fascist” as they cheer for fake CIA revolutions to destroy countries. Pro-war rightists call me “#Communist” as they push Pentagon regime change to destroy countries. I’m a socialist, sure, but why does advocating peace get under so many people’s skin?
0 replies0 retweets0 likes

WesternWomen4Justice‏ @Women4JusticeW Sep 16
Not to be confused with WM, this is being led by Cindy Sheehan. Even if you can't go, you can write a letter and make your voice be heard. #WomenMarchForPeace #LettersToTheWarMachine #NoMoreWars #GivePeaceAChance #SundayMorning marchonpentagon.com
0 replies2 retweets3 likes

Women’s March on the Pentagon‏ @WomenMarch4Paz Sep 13
If you missed yesterday's community conference call, don't worry! You can listen to the recording here -->
0 replies5 retweets5 likes