I think "Emmie" may be my favorite Laura Nyro song.

And for more on Laura, see Elaine's "THE ESSENTIAL LAURA NYRO" that just went up.

My favorite Laura album is ELI AND THE THIRTEENTH CONFESSION.

Moving to politics, Tulsi Gabbard is running for the Democratic Party's presidential nomination.

Tulsi Gabbard‏Verified account @TulsiGabbard
(2/2) …fought for the freedom of all Americans was aloha—love. On this day, let us remember the words of Martin Luther King: “Darkness cannot drive out darkness; only light can do that. Hate cannot drive out hate; only love can do that.”
6:29 PM - 19 Jun 2019
30 replies87 retweets638 likes


Does anybody know why loud mouth Samantha Bee hates Tulsi so much?

I have no idea.  But Samantha is not funny.  She's Big Edna.  I can't remember who in the community told the story of Big Edna.

But Big Edna, what she was called by her detractors in her old age, thought she was cute.

She wasn't.  When she had been, in her early 20s, it was thought funny that such a sweet looking young person would make such mean statements.  The juxtaposition of what she said versus how she looked created comedy.

But as the got to be in her 50s and the looks were gone, those bitter and mean statements weren't cute and she just seemed old and bitter.

That's Samantha Bee.  She aged out of that 'routine' about 20 years ago but no one had the guts to tell her.

No one even watches her show. 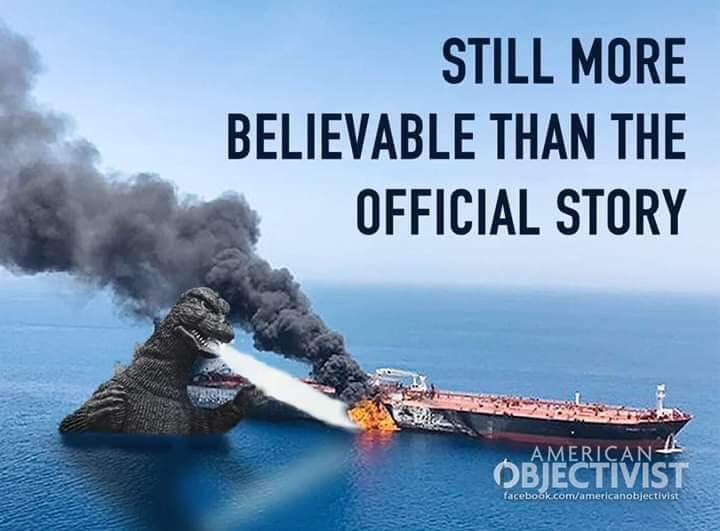 On my end, it does.  I think that's the funniest Tweet of the week -- and probably the truest.  Margaret Kimberley is right, it is more believable that Godzilla attacked the oil tanker than that Iran did.  :D

Wednesday, June 19, 2019.  ExxonMobil gets attacked in Iraq, Tulsi Gabbard calls out war on Iran but other elected Dems, presented with a huge gift, don't appear to grasp what's taking place.


Democrats in elected office?  Not the brightest bunch.  You get the feeling if Mr. Ed strode into Speaker of the House Nancy Pelosi's office, they'd ask him if he had an appointment.

They wouldn't be amazed by a talking horse, they wouldn't be interested or even notice.  They'd just be, "Sir, do you have an appointment to see the Speaker?"

That really is the key question.

You have John Bolton and the Secretary of State agitating publicly for war with Iran. You have Donald Trump doing what exactly?

Next year, he faces re-election. Who is going to vote for him? That’s a question that the Democrats should be raising. They probably won’t. They’re not really anti-war – not the bulk of them.  So they don't appear to care about a war on Iran to that factor.

Repeatedly, Donald Trump keeps making noises that scale back on the war lust of Bolton and Pompeo.

If he's in charge, why isn't he pulling the leash on John and Mike?

Who's in charge?  That would be a pretty strong campaign commercial.

If it were done straight forward -- no snark, just serious concern being expressed -- it could reach even some Trump supporters.

If the man who is currently the president of the United States is not the one making the decisions, why you want him back for four more years?  If he can't even control his underlings, why would anyone see him as strong or worthy?

War with Iran is not needed.  It's not wanted.  I pray it won't happen.  But the current climate should have resulted in a Democratic response.  Clearly, we can't count on them to be anti-war.  This is the party that promised to end the Iraq War if we gave them one house of Congress in the 2006 mid-terms.  We gave them both houses and they continued the war.  In 2008, Barack Obama ran for the presidency and was elected for being opposed to the Iraq War (he really wasn't, Elaine and I were face to face with him before he was in the Senate so peddle that crap elsewhere) and he was going to bring all US troops out of Iraq.  He had two terms as president.  He left with US troops still in Iraq.  And US troops are still in Iraq.

So it's apparently too much to hope that anyone -- even fake asses like Barbara Lee -- will call out what's going on in terms of, "We don't need another war!"

So how about they call it out based on the fact that no one watching can figure out what the hell's going on.

He was going to be smart, he was going to put America first.  Now the US is edging towards war on Iran and he appears to be either pulled along or unaware of the actions of his underlings.

And why isn't Nancy Pelosi on every TV program asking, "How can he be planning war on yet another country when we don't even have a Secretary of Defense?"

That is a rather big issue, a rather glaring hole.

It's as though Christmas came early for the Democrats and everyone's decided not to shake the packages under the tree or even peak a little.

These are not national secrets.  These are issues out there in the public eye.

Why is no one commenting on them?

Why is no one using them to underscore the message that Donald Trump is not a leader?


Here we go again! The US sending more troops to Middle East for what will be disastrous war with Iran. To prevent Trump and future presidents from waging war illegally (without Congress approval) we must sign my No More Presidential Wars Act. Join me: tulsi.to/iran10
1:37
42.3K views
Stop Trump from waging illegal Iran war
285 replies2,145 retweets5,034 likes

Tulsi Gabbard‏Verified account @TulsiGabbard Jun 17
I know both the importance of ntl security & the high cost of war. As president, I’ll improve intl relations w/ all countries & work to solve differences thru diplomacy. I see military action as the LAST resort & only w/ Congress approval, as per my No More Presidential Wars Act.
No More Presidential Wars
232 replies1,414 retweets4,177 likes

But Tulsi actually cares about these issues.

You'd think that the least even fake ass Congressional Democrats could do would be to point out that Donald looks as though he's addled or confused, as though anyone but him is leading and in what world do you allow your underlings to push for war when you still don't have a Secretary of Defense?

That should be the message.  That would have a lot more effect than the nonsense of 'impeachment!' -- that ship really has sailed.

Looking at Elizabeth Warren's campaign Twitter feed, what's Dull Mommy offering over the last 24 hours?  How to parent and give aways.  And we've got nothing regarding a war on Iran.

War really isn't an issue that Elizabeth Warren feels comfortable addressing, is it?

That does not speak well for her should she become president.

At his campaign Twitter feed, Bernie Sanders is calling Trump dangerous and out of touch -- but somehow not connecting that the push for war on Iran by underlings while Trump appears to be repeatedly nudged towards it.

Beto O'Rourke is all over the map -- lending credence to Senator John Coryn's recent charge that Beto's not really in the race anymore.

Where are the leaders?  There's Tulsi and we've noted her.

But for those Dems to chicken to object to a violent war on fake charges, can't they even notice that there's no Secretary of Defense and that Trump appears to be being strong armed into war on Iran?  Because that doesn't look presidential, that doesn't scream "Leadership!"

That says he's as out of touch as Bernie maintains Donald is.


Search results
BREAKING: ExxonMobil set to evacuate staff from Basra in southern Iraq after their headquarters were struck by a rocket
21 replies304 retweets377 likes


"Passion Play (When All The Slaves Are Free)," written by Joni Mitchell, first appears on her NIGHT RIDE HOME.

Enter the multitudes
In Exxon blue
In radiation rose
Ecstasy
Now you tell me
Who you gonna get to do the dirty work
When all the slaves are free?
(Who're you gonna get)