Tulsi throws her hat in the ring

Did you see this?

Shirtless Pundit  🇺🇸‏ @zachhaller 39m39 minutes ago
Won’t be supporting her or any Democrat in 2020 but I do appreciate Tulsi Gabbard for being the only Democrat courageous enough to put the party on full blast for rigging the 2016 primary.
1 reply3 retweets17 likes 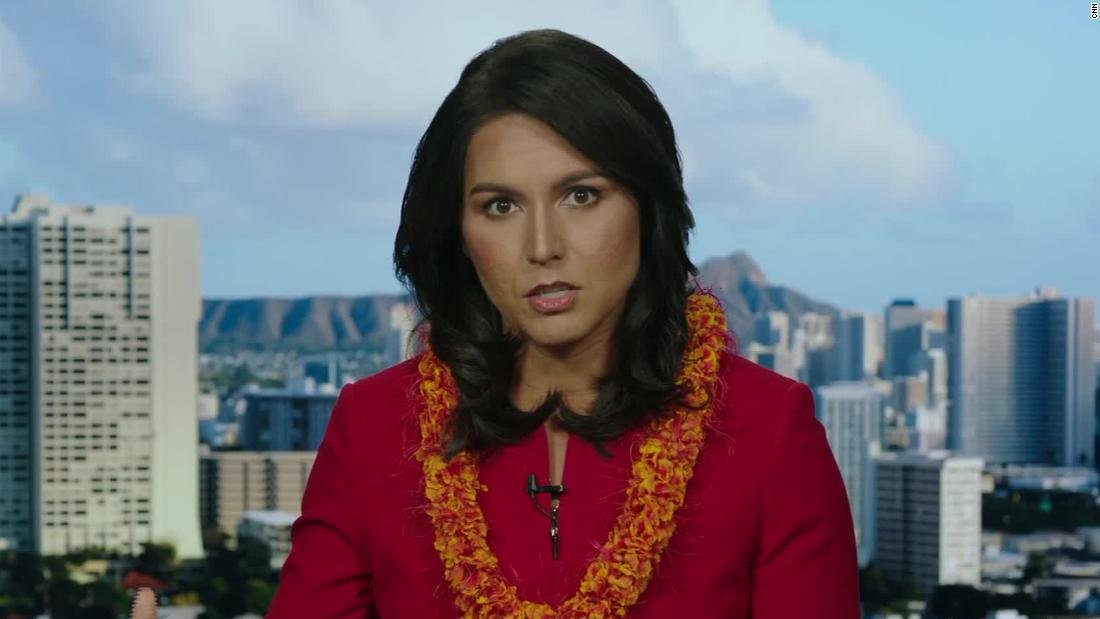 Right now, she's the one I would vote for.  I'm glad she's running.  I think real issues will come out as a result of her being in debates.  And if she runs a strong campaign, she's got my vote.  I think she'd be a great president.


I think she's great.  I've never seen her campaign before but I hope it will be great.  If the election were tomorrow I'd be voting for Tulsi absolutely.

Friday, January 11, 2019.   Violence as another car bomb explodes while the issue of Kirkuk continues to be ignored and much more.


Iraq is again slammed with violence as a car bomb explodes today. 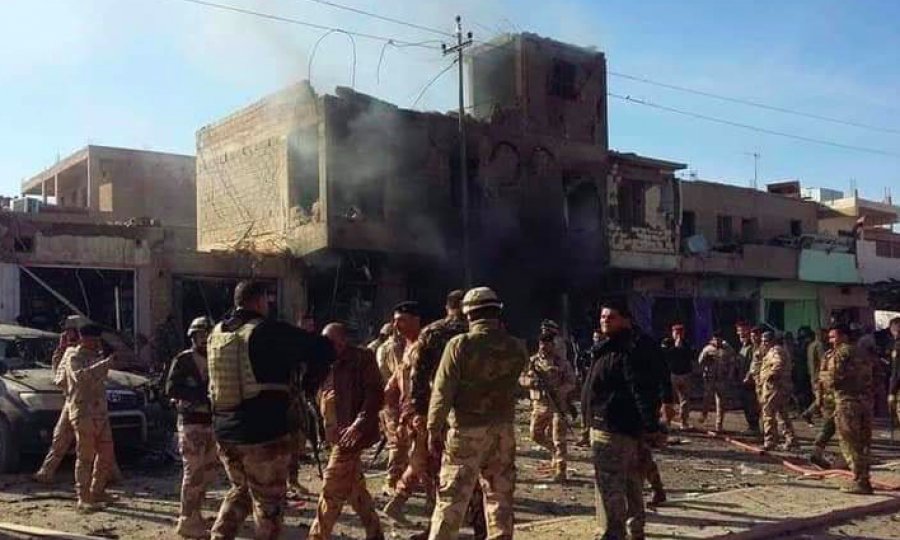 Up to two people were killed and 25 injured Friday in a car bomb explosion in the town of al-Qaim near the border with Syria, official and security sources said.
"The final casualties from the car bomb explosion at a marketplace in al-Qaim town is two civilians killed and 20 others wounded, along with five policemen," said Nadhim al-Dulaimi, head of al-Qaim town council, told Xinhua.

The violence never ends.  And, yes, the violence includes the non-stop bombing of northern Iraq by the government of Turkey.  Ahmet Salih Alacaci (AA) repeats the claims by the Turkish government:

Five PKK terrorists were neutralized in northern Iraq overnight, the Turkish Defense Ministry announced early Friday.
Turkish authorities often use the word "neutralized" in their statements to imply that the terrorists in question either surrendered or were killed or captured.
Airstrikes carried out in Hakurk region neutralized terrorists plotting attacks on Turkish bases, the ministry said on Twitter.


The reality is that most Turkish targets have been civilian targets.  But the Turkish government doesn't admit to that or issue statements explaining that. And AIRWARS and other outlets aren't interested in tracking those bombings.  So civilians are wounded and die from these bombings over and over.  Iraq's Ministry of Foreign Affairs did condemn these bombings at the end of last year, a least that's something.

The US-led war was supposed to bring peace, democracy -- large servings of 'freedom' fries for each and every Iraqi.  It's brought nothing but death and destruction.  And it continues to this day.  In fact, the 16th year anniversary of this still never ending war is mere months away.  Is the objection from Iraq's Foreign Ministry something that can be built on?  Let's hope so because this constant bombing is not an answer.

TREND notes, "The conflict between Turkey and PKK, which demands the creation of an independent Kurdish state, has lasted more than 35 years, claiming more than 40,000 lives. PKK is recognized as a terrorist organization by the UN and the EU."  If you accept that description, explain how the Turkish government endlessly bombing villages makes the civilians admire Turkey?  Explain how these bombings -- of innocent civilians -- don't just create more anger and breed terrorism?

Aaron Hess (INTERNATIONAL SOCIALIST REVIEW) explained in 2008, "The Kurds are the world's largest stateless population -- whose main population concentration straddles Turkey, Iraq, Iran, and Syria -- and have been the victims of imperialist wars and manipulation since the colonial period. While Turkey has granted limited rights to the Kurds in recent years in order to accommodate the European Union, which it seeks to join, even these are now at risk."


Along with grasping the historical grievances the Kurds have -- which are not addressed by the international community -- grasp that US troops are in Iraq.  In case anyone forgot . . . 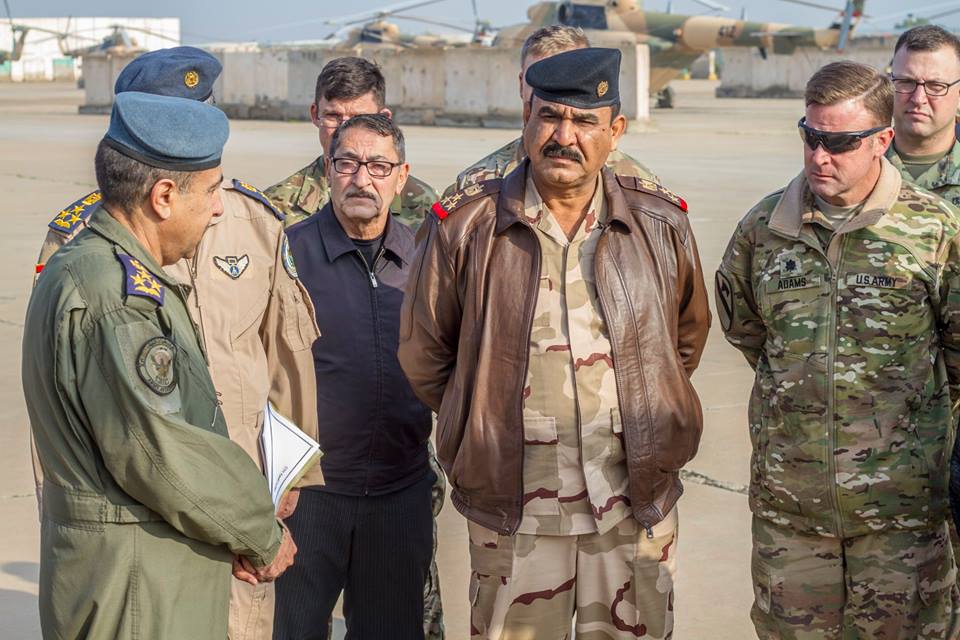 There are US troops on the ground Iraq.  (Officially, it's around 5,200.  Unofficially, that does not include a list of troops which includes Special-Ops.)  And it has not prevented Iraq from being bombed by Turkey.

Yet some are insisting that US troops must remain in Syria to . . . protect the Kurdish population from, get this, the Turkish government.

Again, US troops have been on the ground in Iraq for nearly 16 years and that hasn't helped the Kurds in northern Iraq one bit.  Time and again, we are told that doing the exact same thing one more time will work out differently this time.

Is the argument that "just enough elbow grease" wasn't put in on the last attempt?

As what time, as taxpayers, do we demand that the US government stop wasting our money by pursuing these endless wars that never end and never produce peace?  At what point do we scream, "Stop playing with out money!"  That's what we let them do.  And their play results in the deaths of so many.  Where are the results?  There are none -- none that can argue for these continued wars.

If you can't support a peace position, you'd think people could at least get on board with refusing to continue to toss out more millions on a failed strategy.

He gets one more thing right, the US government installed puppets (I believe he says the "wrong people" -- there are no right puppets).  But mainly he blathers on about how he doesn't know what happened to Saddam Hussein's weapons, but he had them, he had them, he had chemical weapons, he had them.  He sounds like the drunk that refuses to leave at closing time.

No, he did not have Weapons of Mass Destruction.  If soused Ben can't recall reality, let's help him out.

Bully Boy Bush told the public that we didn't want "a mushroom cloud" -- nuclear.  He lied about ties Saddam Hussein had to al Qaeda.  He lied about the Iraqi government pursuing yellow cake uranium.  He refused to let the weapons inspectors do their work and instead forced them to pull out of the country before they could finish inspections.

Let's hope Ben Hodge is a happy drunk because he's certainly not a helpful one.  Move it, Ben, we've got to sweep the floor and marry the catsups, go home.

That really is the truth about war as well.  US out of Iraq.  Let the clean up and rebuilding begin because it can't happen while you continue to occupy the country (and back the puppets the US government has installed).

Reminder, WMD was the basis of the war for public consumption.  Remember THE NEW YORK TIMES began selling that in October of 2001.  They were front paging it.  And not just Judith Miller,  Or just Michael Gordon.  Chris Hedges wrote an infamous front page article -- based on anonymice and other squeak toys -- which blew up in his face and where is that day of personal reckoning for Hedges?

We'll come back to the Crisis Group.  For now, AFP reports:

Iraqi special forces deployed Thursday in Kirkuk after the raising of the Kurdish flag over a political party headquarters revived tensions more than a year after Baghdad seized the disputed northern city.
Iraq’s counter-terrorism chief gave President Barham Saleh’s Patriotic Union of Kurdistan (PUK) until noon on Friday to lower the red, white, green and yellow flag of the autonomous region of Iraqi Kurdistan.
Under Iraq’s constitution, multi-ethnic Kirkuk province is controlled by the central government in Baghdad.

Regardless of the Kurdish region’s final political status, given its designation in the Iraqi constitution as a federal region it must have an agreed-upon internal boundary with the rest of Iraq. As long as Baghdad and Erbil can find a formula for sharing Iraq’s oil revenues, including those deriving from Kirkuk, that boundary’s location becomes less politically sensitive. Indeed, in its study on the disputed territories UNAMI discovered that many people in these areas would prefer an “in-between” status for these districts that would preserve their diversity and intercommunal harmony. This would require a series of local power-sharing and joint security arrangements, as well as an overall revenue-sharing deal between the federal government and the KRG.

Domestically, support for a renewed attempt at settling the boundary question is growing. Iraq’s new president, Barham Salih, has signalled his intent to address the matter, and parliamentarians with Muqtada Sadr’s winning Sairoun list have visited the Kurdish region to initiate discussions. They will need outside support.
The regional environment is also conducive to this effort. When the Iraqi army retook the disputed territories from Kurdish forces in October 2017, the federal government had the support of Iran, Turkey, European states and the U.S., all of which had publicly warned the KRG not to proceed with a Kurdish independence referendum the previous month, viewing it as a step toward Iraq’s breakup. Their support for Iraq’s territorial integrity has translated in the past into support for efforts to bring Baghdad and Erbil to the table on the disputed territories question, and should do so again.

In assuming this task, the incoming UNAMI chief, Jeanine Hennis-Plasschaert, should start by testing the political waters, increasing staff dedicated to the issue and developing a strategy for addressing it. In the meantime, the UN should help defuse the fallout between Baghdad and Erbil from the independence referendum, when the federal government and Iran took punitive measures against the Kurdish region by banning international flights and blocking Kirkuk oil from flowing through the
Kurdish pipeline to Turkey. The government has reversed some of these measures, but talks on remaining ones are ongoing and the UN can shepherd them to a successful conclusion. Next, UNAMI should start negotiations focusing on “low-hanging fruit”, such as joint security mechanisms in the disputed territories that would prevent ISIS from exploiting security gaps between contending military actors. Ultimately, UNAMI should focus the two sides on the big questions: revenue sharing (not discussed in this report) and the status of the disputed territories.

The alternative is letting the issue linger and hoping that it does not turn violent again.

Kirkuk -- per Iraq's Constitution -- Article 140 -- was supposed to have been resolved by a referendum no later than December 2007.  The Iraqi government refused to do so.  It's still not taken place.  And the US government ignores it because they don't support the KRG -- or stand by any Constitution.  The Rand Corporation warned, while Bully Boy Bush still occupied the White House, that this issue needed to be resolved and that "kicking the can" would only create more problems.

It's still not resolved, it's still a source of tension and conflict.

What has the ongoing war accomplished?  Not a damn thing.