Right now, Tulsi Gabbard remains my top choice for 2020.  No, the slimefest attacks are not changing my mind.  I find it telling how hard the media is working to attack her.

Kevin Gosztola‏Verified account @kgosztola
I chose to cover Tulsi Gabbard's announcement that she'll run for president because vast majority of media coverage disingenuously engaged with her record. Most aimed to disqualify without assessing what campaign might generally represent to voters.
6:25 AM - 15 Jan 2019
32 replies86 retweets183 likes

I will not vote Kamala Harris.  Margaret Kimberley's column nailed my opposition to Kamala.

Military commanders warned President Donald Trump on December 26 during his surprise visit to Iraq that -- despite his claims to the contrary -- ISIS was not entirely defeated in Syria.
People familiar with the President's reaction said the conversation was eye-opening for a leader who days earlier claimed the terror group was defeated "badly" in the country.


Despite his claims?  Oh, Kevin you and your ilk are such an embarrassment.  Check out this site in December 2017 and all through 2018 -- despite the media claiming ISIS was defeated in Iraq, we noted reality, it wasn't defeated.

Remember how the US media repeated the lie over and over -- in part to assure Americans that Hayder al-Abadi was some sort of hero.  They did similar things with Nouri al-Maliki.  The American media was not reporting, it was advancing talking points from the US State Dept -- it wasn't about what was, it was about what the US government wanted you to see.

Liptak really needs to check his sense of self-importance.  I love the "surprise visit" -- as though every visit hasn't been a surprise one.  King Abdullah II of Jordan's visit this week was a 'surprise visit' with the kingdom denying up until the king landed that he was going to Iraq.  Barack Obama, Joe Biden, Bully Boy Bush all made 'surprise visits.'

Kevin thinks he's sniffed something out -- I'm sure he has and maybe now he'll learn to wipe?

In the meantime, will all the children please leave the room?  In the meantime, let's try to get honest.  US troops are not going to defeat ISIS.  Not in Syria, not in Iraq, not anywhere.

By declaring war on them, you elevate them.

When Ed Snowden went to Russia and Barack began his verbal attack on Vladimir Putin, we noted he was elevating Putin.  And he was.  We noted the same thing with regards to ISIS.  But on that one, Barack grasped it.  It's why he made his junior varsity crack.

So inflating ISIS automatically creates sympathy for the terrorist organization.  'The imperial devil is against ISIS?  Yea ISIS!'  But more to the point, the US at war against ISIS?

What likes to think of itself as the lone super power at war against ISIS?

It's Goliath (the US) versus David (ISIS).

You can't get better recruitment than that.

ISIS will never be destroyed by war.

Terrorism is an ideology and it is born from a belief of imbalance.  When that belief is backed up with something like 'The US declares war on ISIS!,' you have recruitment and increased membership.

The US military will never 'win' against ISIS.  That's not a job a military can handle.

Idiots who don't grasp that are like the liars who pretend they don't in order to keep never-ending wars going.

The smartest thing Donald Trump could do would be to remove all US troops from Syria -- as well as Iraq.  It would be safer for both Americans and Iraqis if that happened.  As it is, ISIS recruits flowed to both countries due to the presence of the US.

While the children are still out of the world, let's point out another reality with regards to terrorism: when people feel wronged, it would do the larger society good to consider the validity of those claims.

The PKK is a group that fights for Kurdish rights.  They are labeled a terrorist organization by many (including the US government).  Turkey is happy to bomb northern Iraq (killing and wounding many civilians) while they pretend they are attacking the PKK.  But at what point in our history do we look at the grievances of the Kurds?  When do we examine it for validity?

PKK actions have always decreased when it appeared that an examination might take place, an honest inventory.  Ten years ago, Recep Tayyip Erdogan -- yes, Erdogan -- reaped a few benefits by giving the impression that an honesty inventory and dialogue was about to take place.  It never did and violence returned.

Though, of course, the Kevin Liptaks couldn't report it that way.  They had to lie and make it nefarious and complicated and twisted because heaven forbid we ever illuminate basics in foreign relations.  The US government doesn't want you to understand its actions, it only wants you to nod along with whatever they do.

ISIS will be defeated by law enforcement, by recognizing real injustices and addressing them, by an open dialogue where participants -- even those not belonging to the government of a super power -- feel their voice is heard and the future is something that they have a stake in.

These are not complicated issues.  Getting someone to buy-into their own future is neither a new nor novel concept.  But the Kevin Liptaks exist to pass along stupidity, not to inform.

Open the doors, let's allow the children back in and move to another topic.

IRNA News Agency‏Verified account @IrnaEnglish 1h1 hour ago
@JZarif : US, Pompeo has no right to meddle in #Iran-Iraq ties bit.ly/2MhSA95 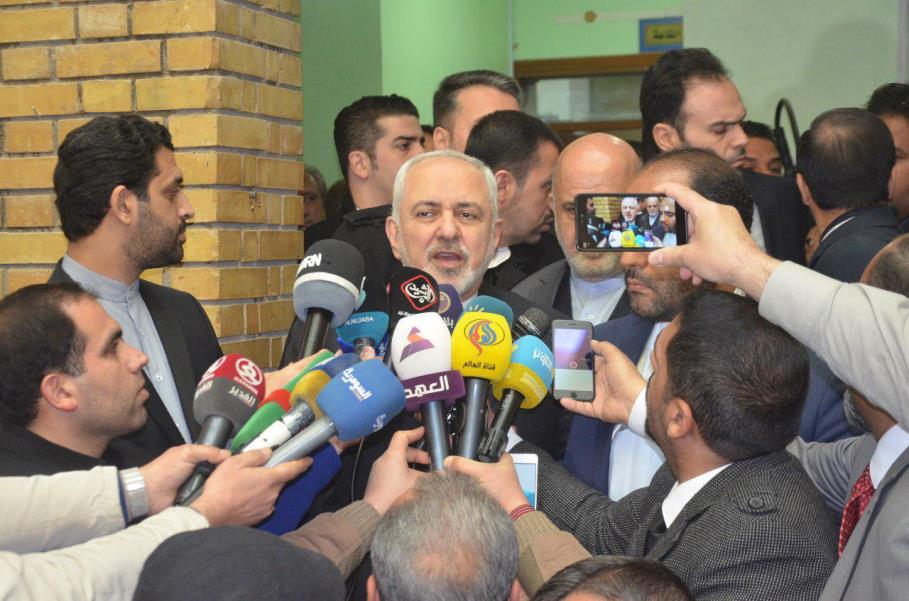 From my point of view, the US government has no business telling the Iraqi government (or any government) who they can be friendly with and, yes, Iran and Iraq sharing a border, it is important that the two nations get along.

But I do understand why some would disagree.

This chart gives one reason.

30 countries receive 82% of all U.S. foreign aid, led by Afghanistan and Iraq, while 121 countries get less than $100 million each on.mktw.net/2DaLpwy

Afghanistan gets the most US dollars with $5.7 billion.  Second place?  Iraq with $3.7 billion.  When you're taking $3.7 billion, you're really going to be expected to take a few strings with that money.

Look at the struggling countries above, the non-oil rich ones.  They get peanuts while oil-rich Iraq gets $3.7 billion -- and this while the whole world knows how corrupt the US-installed Iraqi government is.

The Iraq War hits sixteen in two months.  Sixteen years.  Sweet sixteen.  Will it ever end?


On our return to Camp Lejeune, N.C., we were freed to spend a night with our families. Unable to sleep, I woke my wife at 2 a.m. and made her watch “Napoleon Dynamite,” a movie that so divided my platoon I thought we would come to blows over its absurdities. I wanted her to see and understand something about the previous seven months of my life. I didn’t know how to tell her about a 2-year-old child toddling through window glass shattered by an explosive charge and leaving tiny, bloody footprints on the polished concrete floor of his home. Later that morning, more than a hundred Marines assembled in a final unit formation behind a large brick building immediately across the New River from a demolitions range. Before we were dismissed for the last time as a unified group, some Marines across the river detonated a substantial charge. We all visibly flinched, some of us dropping to the ground, all of us conditioned to dodge the shrapnel and fire that invariably accompanied loud blasts in Iraq. We looked around at one another and slowly stood back up, laughing at ourselves but sharing a level of understanding that has since been elusive.
Ironically, that common understanding is both the thing we most need from each other as veterans and the thing that keeps some of us from effectively reconnecting with civilians, a critical factor as we become civilians ourselves. Sajer’s notion of remaining separated from the human condition, though he claimed not to feel regret, is nothing less than self-imposed exile. Just as I felt when I stood before that Iraqi policeman, it is my responsibility to say something, to find some sort of connection. I just ask that you not get frustrated or awkward and turn away if the translation comes haltingly, or if the truth proves to be more than you wanted.


The headline notes that people are ready to share their stories but are others willing to listen?


A dialogue isn't parallel play.  It requires speaking, listening, debating, thinking, exploring.  Russell Worth Parker wants to initiate a conversation.  Hopefully, it will lead to a lively exchange.


Maybe even an honest one -- if Max Booty can stay out of it.  Maxie's still high on the wars he never fought in and serving up more garbage at THE WASHINGTON POST:


It is impossible to say why the Islamic State struck now, except that it could. But there is little doubt that the announced U.S. withdrawal gives the terrorists an inducement to attack. Gayle Tzemach Lemmon, a colleague of mine at the Council on Foreign Relations, writes about a recent trip to Syria in Foreign Affairs. She notes that the U.S. troop presence in towns such as Raqqa and Manbij was virtually invisible yet highly significant. Two female university students she met in Raqqa told her that the Americans “provided the invisible force field that kept ISIS down and the Russians, Iranians, and Turks at bay.”


He's referencing the deaths of US troops yesterday (see yesterday's snapshot).  If it's impossible to say why the Islamic State struck, then how can it be possible to state "the announced US withdrawal gives the terrorists an inducement to attack"?  Oh, Maxie, you are as laughable as your online photo.  Do you think look sexy?  You don't.  You look ridiculous.  And what's his name?  Matt Drudge, that's his name.  Matt Drudge should sue you over that photo claiming you're trying to appropriate his look.

As for the laughable Gayle Tzemach Lemmon?

I do love how her Wikipedia entry presents her as Diana Prince, formed from clay!  I love that.  It's so novel and so unbelievable.  Where does the "Lemmon" come from?  Per Wikipedia she was apparently sired by her mother and grandmother -- the woman has no father.

At any rate, she's become the 21st century Thomas Friedman.  He spent how many columns 'exploring' the world via his anonymous cab drivers?  She does it with these female university students she's always stumbling across.

The notion that these people pop up before Thomas and Gayle and just happen to say exactly what Tommy and Gayle wanted them to say?  That sort of creative license exists for novelists, not journalists.  But them those aren't really about journalism, are they?

Wait, wait, wait a minute.  As Vanessa might say.

Usually Diane's weekly show goes up on Fridays.  This one is already up:


With last October’s confirmation of conservative Supreme Court Justice Brett Kavanaugh, Roe v. Wade came under greater threat than any time since it became law in 1973. But the movement to erode the protections Roe provides has made steady progress at the state level for years, including in the form of fetal personhood laws.

A special series by the New York Times editorial board explores what these laws are, how they’ve been used to successfully chip away at Roe v. Wade and why women with wanted pregnancies end up prosecuted under them.
The series will appear in print on Sunday, January 20th.

You can stream it now at the link.