Idiot of the week

This week's Idiot of the Week goes to . . . all the people refusing to hold Joe Biden accountable.  He has his own cult, it's small and it's weak, but it's out there.

They make excuses for him even when he's caught lying.

Aaron Glantz Retweeted David Axelrod
Joe Biden voted for the war in Iraq A year after the invasion he argued for sending more troops And that's only the beginning... How in the world could he plausibly say that he opposed the war
Aaron Glantz added,

David AxelrodVerified account @davidaxelrod
It’s one thing to have a well-earned rep for goofy, harmless gaffes. It’s another if you serially distort your own record. @JoeBiden is in danger of creating a more damaging meme. https://slate.com/news-and-politics/2019/09/joe-biden-iraq-vote-what-now.html …
3 replies29 retweets34 likes


If you can't see all that's wrong with Joe, you're one of the idiots of the week.

The Hill‏Verified account @thehill 2h2 hours ago
"Joe Biden lying about Iraq shows why our nation has so many wars" (via @TheHillOpinion) http://hill.cm/rhcm9Yz 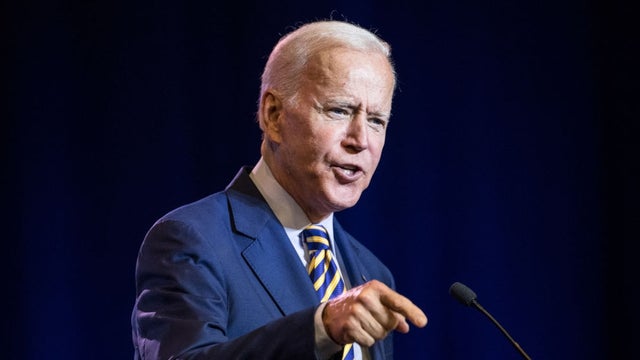 
You have to be an idiot to not see all of his flaws.

Friday, September 6, 2019.  Joe Biden continues to stumble and bumble while, in Iraq, a new air force may be formed.

Starting in the United States where Joe Biden, seeking the Democratic Party's presidential nomination, continues to come under fire for lying about the Iraq War.  At POLITIFACT, Miriam Valverde examines his recent lie and then walks you through the public record before concluding:


Referring to the Iraq War, Biden said, "immediately, the moment it started, I came out against the war at that moment."
That’s not the case. The public record shows that immediately before and after the United States invaded Iraq in March 2003, Biden supported the president. He also on multiple occasions for years justified his vote on a resolution that authorized the use of force against Iraq.
Biden lamented that the United States did not have the support of more nations and gradually criticized the Bush administration’s strategy. But his claim of an "immediate" opposition to the war isn’t accurate.

We rate his statement False.


At ANTIWAR.COM, Daniel Larson observes, "There has been virtually no accountability in all the time since the invasion, and the war’s original supporters would prefer it if we just forgot about the role they played. It is important that we don’t forget what they did, and when one of them tries to reinvent himself as an opponent of the war when he was nothing of the sort he needs to pay a political price for that attempt at deception."  Joe's been able to weasel his way out of many lies recently but this one has been harder for him to skate away from.

It’s one thing to have a well-earned rep for goofy, harmless gaffes. It’s another if you serially distort your own record. @JoeBiden is in danger of creating a more damaging meme.
6:46 PM - 5 Sep 2019
247 replies391 retweets1,517 likes


Tagged a liar yet again.

Reed Richardson (MEDIAITE) reports on another problem for Joe "Biden Declares He's 'Committed to Not Raising Money' from Fossil Fuel Execs . . . at Fundraiser Hosted By Fossil Fuel Company Founder."  Maybe Joe didn't know where he was?  Wouldn't be the first time.  EURASIA REVIEW notes that when this issue was raised at the CNN townhall and Joe stumbled through his answer, that's when he had the issue with his eye (the blood filling one eyes), "By now, in the video-clip, the left side of Biden’s left eye had become — during just this four-minute grilling of him — very visibly overtaken with blood-redness, replacing the normal whiteness there. Clearly, this brief event, precipitated in his body a physiological danger. It’s, by now in the videos, very visible, right there."


Meagan Day (JACOBIN) offers, "On CNN's climate town hall last night, Joe Biden promised a return to the old status quo, Elizabeth Warren promised carrots and sticks, and Bernie Sanders promised to wrest control of the future from corporations. The clock is ticking, and the choice couldn’t be clearer."  From her article:

Whatever else Biden said — and it was mostly gibberish like this — his insistence that the climate crisis begins and ends with Trump, and that the Obama administration provided adequate stewardship on climate issues, is unacceptable and incommensurate with the threat we face. If Joe Biden wins the presidency, we’re toast.
Next up was Bernie Sanders, whose Green New Deal is the most comprehensive plan to address climate change put forward by any presidential candidate, not just in this race but in US history.
Sanders performed well in his segment. With characteristic directness, he covered about three times as much ground as Biden. Reasonable people may disagree with his views on nuclear energy (he doesn’t see investing in nuclear as the path to sustainability) or his great love of energy efficient light bulbs (Warren made a good point later that the conversation about light bulbs, straws, and cheeseburgers is a distraction). But primarily Sanders focused on the contours of his Green New Deal, a national mobilization plan that treats the climate emergency with the gravity it deserves.
Sanders’s plan is aggressive and its timelines are short. It goes after the profits of climate-destroying corporations, proposing a ban on imports and exports of oil and gas, a ban on fracking, and a ban on public-lands drilling. His plan also boldly proposes to build new federal agencies, modeled after the Tennessee Valley Authority, that can provide cheap and reliable public utilities and begin to free our energy grid from the strangulation of private corporations. It proposes to create twenty million new jobs, putting people to work building infrastructure and restoring the environment. For those whose jobs will be lost in the transition, Sanders’s plan proposes five years of guaranteed income and retraining, leaving no worker behind.
Sanders hit most of these points during his climate town hall segment. He demonstrated the depth of his vision right off the bat when he was asked how he would pay for it all. Sanders laid out a four-point plan for paying for the Green New Deal: First, we will end subsidies to the fossil fuel industry. Second, bringing private utilities under public ownership will generate revenue for the federal government while also guaranteeing that no one will go without light and heat. Third, we will slash the enormous defense budget and stop paying to protect US corporate oil interests abroad. And fourth, the mass provision of new jobs — good, public sector, unionized jobs — will mean fewer people on public assistance. He threw in a bonus: We’re going to tax the s[**]t out of Jeff Bezos.

Host Anderson Cooper asked Sanders if he would prioritize his Green New Deal plan over his other ambitious plans, like Medicare for All, tuition-free public college, and student and medical debt cancellation. His answer testified to his holistic vision for change. “To my mind, it’s not prioritizing this over that. It is finally having a government which represents working families and the middle class rather than wealthy campaign contributors.”

I saw Joe's portion and she's correct in her assessment.  I didn't see Bernie (we were speaking during most of the townhalls) but I caught a small section of Elizabeth Warren's (Marcia covered her here "Elizabeth and climate change") and I will note Elizabeth is correct that 'personal responsibility' is a slogan pushed by an industry determined to avoid accountability.  Ava and I called out that nonsense in July of 2007 with "TV: Global Boring" and more recently ADAM RUINS EVERYTHING took on the refusal of corporations to take responsibility for their actions.

Corporate pollution is a serious issue and good for Elizabeth to speak out on that issue.

Why is the Democratic Party apprehensive about Joe Biden?
Though every poll has him running well ahead of his competitors, the Biden campaign has ranged from dull to embarrassing.
Biden began by speaking nostalgically of his days as a young senator and the warm friendships he formed with segregationist senators Herman Talmadge and Jim Eastland, the latter a Mississippi pillar of "massive resistance" to civil rights legislation.

In the first debate, Biden was skewered by Sen. Kamala Harris for having boasted of opposing the court-ordered busing that, Harris claims, enabled her to get an integrated education in California.

Asked, in Keene, New Hampshire, how it felt to be in the lovely town, Biden volunteered, "Look, what's not to like about Vermont."

Biden spoke of meeting in his vice president's office with students from Marjory Stoneman Douglas High School in Parkland, Florida, the scene of a horrific school shooting. Only the Parkland massacre did not occur until after he left the vice presidency.

Speaking in the aftermath of shootings in El Paso, Texas, and Dayton, Ohio, Biden talked of the recent "tragic events in Houston and also in Michigan the day before." After the shootings in Odessa, Texas, done with an assault rifle, an outraged Joe said it was "absolutely mindless" not to ban all firearm magazines that carry more than a single bullet.

And that doesn't include his response to making women uncomfortable -- to speak to a largely male group and make jokes about it.  Hard to believe it's not even been five full months since he declared himself to be a candidate.

The deputy chairman of Iraq's Popular Mobilization Force (PMF) militias ordered on Wednesday the formation of a new air force branch following alleged Israeli drone strikes on Iran-backed militia groups within the PMF.
“Based on Diwani Order No. (79) of 2014… the powers vested in us and the interest of the public attributed us to form the Air Force Directorate,” read a document signed by Abu Mahdi al-Muhandis, whose real name is Jamal Jaafar Al-Ibrahim.

Muhandis, who is on the US' list of designated terrorists, has named Salah Mahdi Hantoush as acting director the air force. In 2012, Hantoush was designated as a global terrorist by the US Treasury Department's Office of Foreign Assets Control.

Why It Matters: Establishing an air force in Iraq separate from the federal government's military branch would underscore the Popular Mobilization Forces' defiance against the Iraqi government. The announcement comes after a series of suspicious explosions at the militia's facilities across the country in recent weeks that some group officials blamed on the Israeli government.


The move makes a mockery of the prime minister of Iraq as well as his recent Tweet.


Clearly, his promise to protect the "territorial integrity" of Iraq is not one that's believed.  The government of Israel has bombed Iraq at least four times this year.  The prime minister has been meek to the point that former prime minister and forever thug Nouri al-Maliki thinks he may have found an issue to ride back into the post of prime minister -- stand strong against Israel!  Whether his words will wipe away his well known past remains to be seen.  While Nouri remains unpopular, his remarks about standing up against Israel have resonated with many Iraqis on social media.

Some Tweets on the reports of the militias forming an air force:

#PMU have formed an Air Force Directorate, in what appears to be a response to the recent airstrikes in #Iraq

PMU refuses to create air force in Iraq. This rejection comes after Sadir tweeted that the current Iraqi government must be dissolved.
0 replies0 retweets0 likes

Not sure if these are one-in-the-same. Ta Qaddum is one of the larger Iraqi Air Force bases. TAQADDUM, IRAQ
0 replies0 retweets1 like

Iraq's Hashd al-Sha’abi to form own air force, to fight against and defeat the filthy, illegal Apartheid Israeli airstrike attacks on Iraq and the Shia Militas fighting ISIS terrorists.
0 replies0 retweets1 like