As C.I. noted in Friday's "Iraq snapshot," the US government has confirmed that Israel has been bombing Iraq.  Now when this possibility first made the news, C.I. argued in the July 30th Iraq snapshot that these actions, if true, should be seen as an act of war.  And while C.I. was raising awareness, MOON OF ALABAMA was serving up garbage like "No, Israel Did Not Attack Iranian Targets in Iraq."

So you had people like C.I. trying to get the word out and you had immediate pushback from the likes of MOON OF ALABAMA insisting, with no proof, that Israel did not attack Iraq.

Now it has been confirmed.

What is MOON OF ALABAMA anyway?  An agent of Israel?  What was ever the point in that garbage reaction?

We should all be appalled and screaming our heads off.  This matter should go before the United Nations General Assembly.  This should not be ignored or normalized.

MOON OF ALABAMA should be ashamed that for almost a month they have downplayed these attacks and argued that they didn't happen.  Shame on them.  How stupid. 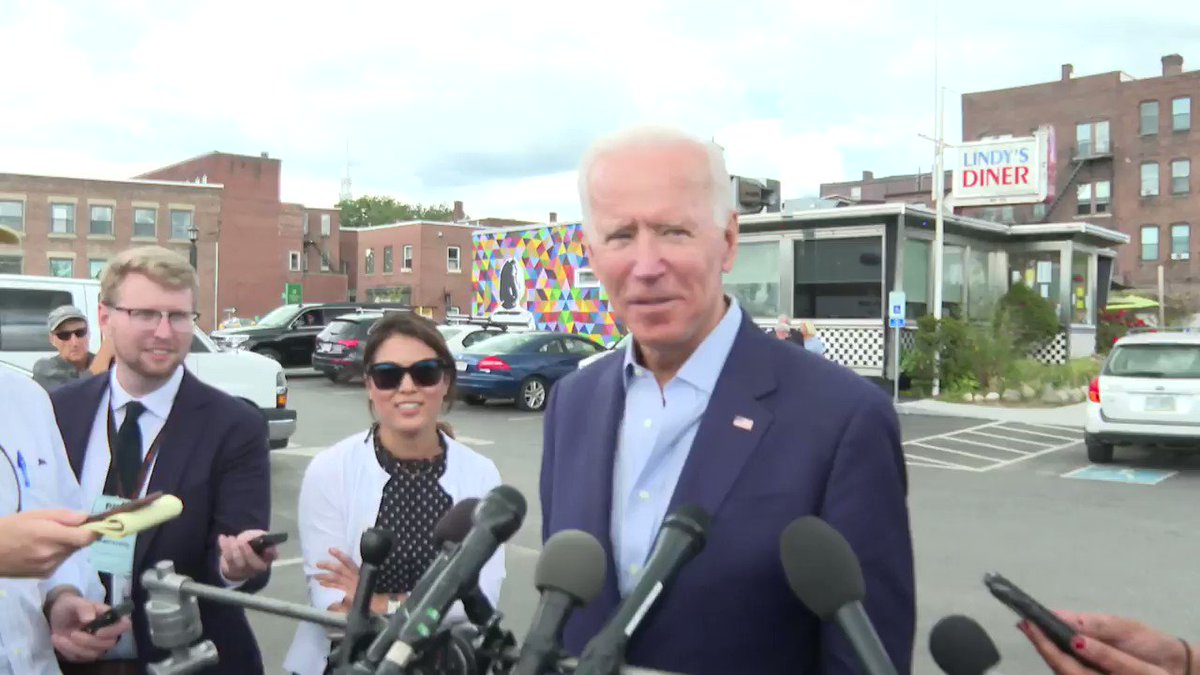 0:22
Steve GuestVerified account @SteveGuest
Joe Biden in Keene, New Hampshire: "I’ve been here a number of times...I love this place. Look, what’s not to like about Vermont in terms of the beauty of it?”
72 replies110 retweets555 likes

Joe isn't fit to be president.  And we all need to remember that Tulsi Gabbard had the option of confronting him in the July debate but she took a pass twice.  And then she spent the next days defending him.

Joe Biden is a danger as a president.  And Tulsi could have confronted him, maybe even stopped him.  He's a War Hawk and she took a pass.  She's a disappointment and a faker.

So now I'm rooting for either Senator Elizabeth Warren or Senator Bernie Sanders.

Here's some Tweets from Bernie.

Here are some Tweets from Elizabeth.

Friday, August 23, 2019.  The US confirms that the Israeli government has bombed Iraq, Bernie Sanders presents a plan for workers, and much more.

The Israeli government has once again bombed Iraq.  Monday, they bombed Balad Air Base where the Iraqi militia (Popular Mobilization Forces -- Shi'ite forces linked to Iran) have stored weapons.  The Iraqi militias -- linked to Iran or not -- are part of the Iraqi government forces.  The previous prime minister, Hayder al-Abadi, oversaw that incorporation.   This was at least the fourth bombing the government of Israel has carried out on Iraq..


Israeli media first began reporting about this at the end of June.  Dropping back to the July 30th Iraq snapshot:

How is this not an act of war?

Israel has expanded its operations against Iranian targets to Iraq, where Air Force jets have struck twice in ten days, a report said Tuesday morning.
Israel commonly conducts strikes in Syrian territory, targeting Iranian missile shipments meant for Lebanese terror group Hezbollah to use against the Jewish state, but strikes in Iraq by Israel have not been reported since the 1981 bombing of a nuclear reactor.

That's from Michael Bachner's report for THE TIMES OF ISRAEL.

Repeating: How is this not an act of war?

What if it was the US that was bombed?

Let's use Recep Tayyip Erdogan as an example because on his visit to the US he had his goons attack peaceful protesters -- and by the way, Barack Obama was president and refused to condemn that publicly.  But Recep decides peaceful protesters are terrorists so he decides to send Turkish war planes over Baltimore to bomb the city.

We would rightly see that as an act of war.

How is this any different?


It's not any different.  And now Lolita Baldor and Josef Federman (ASSOCIATED PRESS) report, "Israel was responsible for the bombing of an Iranian weapons depot in Iraq l[a]st month, U.S. officials have confirmed, an attack that would mark a significant escalation in Israel's years-long campaign against Iranian military entrenchment across the region."  AL JAZEERA adds:


Earlier this week, the deputy head of the Iraqi Shia militias, known collectively as the Popular Mobilization Forces, openly accused Israeli drones of carrying out the attacks, but ultimately blamed Washington and threatened strong retaliation for any future attack.
Such attacks are potentially destabilising for Iraq and its fragile government, which has struggled to remain neutral amid growing tensions between the United States and Iran.
Al Jazeera's Natasha Ghoneim, reporting from Baghdad during the latest round of air raids, said Iranian-backed armed groups have been operating in Iraq with the full support of the government since 2014, when they joined the fight against ISIL.

"A new law that came into effect on July 31 requires all paramilitary groups to report to the Iraqi security forces, or put down their weapons," Ghoneim reported.

The Israeli move also holds potential hazards for the United States, whose troops remain in Iraq in the fight against the Islamic State. Because the United States is a close Israeli ally, Iraqis are quick to blame it for allowing the Israelis to carry out attacks in Iraq.
A senior American official said that Israel was pushing the limits with the strikes in Iraq. Speaking on condition of anonymity to discuss delicate diplomatic matters, the official said the airstrikes could get the United States military removed from Iraq.


As the US has confirmed what was already out there, many are now issuing statements -- including former prime minister and forever thug Nouri al-Maliki.


Senior US officials told @nytimes that Israel has carried out “several strikes in recent days”,the most recent of which took place on Monday,north of Baghdad. Former Iraqi PM Nouri al-Maliki is warned of a"strong response" if it is proven that Israel was behind recent airstrikes.


Former Iraqi Prime Minister Nouri al-Maliki is warning of a “strong response” if it is proven that Israel was behind recent airstrikes in Iraq.


In statements issued by his office on Friday, he also said that if Israel continues to target Iraq, the country “will transform into a battle arena that drags in multiple countries, including Iran.”

These attacks that the Israeli government has carried out are acts of war.  The militias -- linked to Iran or not -- are part of the Iraqi forces.  Attacking them is attacking Iraq.  These are acts of war and the Israeli government should be called out for their actions.
You can be sure that Nouri and others will begin to call out the current prime minister for the attacks and his lack of response to them.  Adil Abdul-Mahdi is already facing criticism for his inability to improve the lives of the Iraqi people or to end corruption -- he promised to end corruption.  RUDAW reports:

Iraqi parliament’s Sayirun alliance, headed by influential Shiite cleric Muqtada al-Sadr, has upped its criticism of Prime Minister Adil Abdul-Mahdi for what it says is his failure to live up to the promises of improved services to Iraqis that it made upon appointment.

Frequent powercuts and an unclean, infrequent water supply have been a source of perennial discontent among Iraqis nationwide. Abdul-Mahdi has signed a series of redevelopment projects with multinational companies to repair the country’s electricity grid and sanitation system that have been ailing for decades, but Sayirun members say efforts have been to little avail.

“After a year of Abdul-Mahdi being in office, now is the time to look again at the government manifesto and work on it diligently,” Abbas Ileiwi, member of the Sayirun alliance, which is the Sadr-dominated bloc in Iraqi parliament, told Rudaw on Sunday.

Abdul-Mahdi’s administration has come up short in meeting the needs of the Iraqi people “who lack the simplest of the essential services,” added Ileiwi.
We'll note this Tweet.
New on MoA: U.S. Says Israel Bombed Iraq moonofalabama.org/2019/08/us-say…

Golly gee, we were covering this story on July 30th.  What was MOON OF ALABAMA doing?
Hmm.
Oh, that's right.  Showing up two days later to insist that "No, Israel Did Not Attack Iranian Targets in Iraq."
Well welcome to the party, MOON OF ALABAMA.  Foods all gone but the bar's still open so have a drink or two while you try to catch up to reality.
In the US, the race for the Democratic Party's presidential nomination continues.  Barry Eidlin (JACOBIN) notes:

Bernie Sanders unveiled his Workplace Democracy Plan (WDP) yesterday. The plan is based in a deep and sophisticated understanding of the fundamental problems facing workers today; it is the most serious, comprehensive, and equitable plan for promoting workers’ rights ever proposed by a major US presidential candidate.
Just as he did with Medicare for All, Sanders’s WDP will now set the terms of the debate around workers’ rights in the Democratic presidential primary. Whether they support or oppose the WDP, all the other candidates will have to respond to it.
The plan is a comprehensive effort to reorient labor policy around the idea that these policies exist to actively promote workers’ rights, as opposed to setting up the state as an ostensibly “neutral” arbiter to balance labor and management’s competing interests. It recognizes and seeks to redress the inherent power imbalance between workers and their employers, an imbalance that derives from the simple fact that an individual worker’s need to stay employed is greater than an employer’s need to keep that worker employed.
That’s why the WDP removes barriers to workers’ ability to join together in unions by implementing a “majority sign-up” process, whereby workers unionize when a majority in a workplace says they want a union by signing authorization cards. It recognizes that the decision to unionize is one that workers should make among themselves — without outside interference from employers, as the current union recognition system allows for.
That’s also why it restricts employers’ ability to force workers to attend anti-union meetings, requires employers to disclose when they use anti-union consultants, and guarantees union organizers equal time in the workplace to talk with workers. Once workers have unionized, it also requires employers to negotiate a first contract or face binding arbitration. Additionally, it extends union rights to all public sector workers, and finally removes the arbitrary and racist exclusion of agricultural and domestic workers from labor law protections.
The WDP recognizes that workers’ rights can only be exercised and enforced collectively. Too often, employers and courts have used a warped interpretation of individual rights to undermine workers’ collective rights. Nowhere is this more apparent than with “right-to-work” laws, which use the pretext of protecting individual workers’ right not to join a union to erode union solidarity. They do so by allowing individuals in unionized workplaces to avoid paying the costs associated with negotiating and enforcing the contracts from which they benefit. The WDP would close that loophole by banning right-to-work laws.

The WDP also promotes workers’ ability to exercise their collective rights by enforcing and expanding the right to strike. Sanders recognizes that this is “a worker’s line of defense.” It’s “the means that you have to tell your employer, ‘Hey, we’re serious.’” To that end, it bans employers from using permanent replacements (“scabs”) when workers go on strike, expands the right to strike to public-sector workers, and allows for “secondary boycotts,” where workers pressure their employer by taking action against economically linked companies.
Lastly, billionaire conservative activist David Koch has died.  It's said that somewhere in hell he's trying to buy his way into heaven but is being stymied by heaven's refusal to be bought -- angels, unlike politicians, apparently cannot be bought.