Propaganda outlet of the year

BLUE NATION REVIEW -- where the liars go to be lied to.

Some of you have been sending me some of the crap from that website asking, "Are they for real?"

They're for real about lying.

They're the Fox News of the internet.

They live in an alternative reality where it's okay to lie and where they embrace lying.

They've got an article that most of you noting the site have noted -- Bernie used to be great and uplifting before he started attacking Hillary!!!!

BNR has been attacking Bernie from the beginning.

This is just their latest lie.

They're not about news.

They aren't about information.

They're about propaganda and brain washing.

Anyone with a brain should reject this garbage outright.

Saturday, March 19, 2016.  Chaos and violence continue, another US service member dies in Iraq, there's still no progress in the never-ending Iraq War, a piece of trash supporter of Hillary Clinton decides to attack the wife of Bernie Sanders, and much more.

In Iraq, another US service member has been killed in the never-ending war.

SOUTHWEST ASIA -- The Combined Joint Task Force-Operation Inherent Resolve can confirm the death of a Coalition service member in northern Iraq today as a result of enemy action.

Further information will be released as appropriate.

It is CJTF-OIR policy to defer casualty identification procedures to the relevant national authorities.

A U.S. Marine was killed in a rocket attack by ISIS on a base at Makhmur in northern Iraq, the Pentagon said Saturday.
Pentagon Press Secretary Peter Cook confirmed the death in a statement. He said the Marine was "providing force protection fire support at a recently established coalition fire base near Makhmur in northern Iraq."
Cook added that several other Marines were wounded, though he did not provide details on their conditions.

A senior Iraqi army officer in Makhmour said two rockets landed about 8:20 a.m. Saturday on the U.S. camp, a small, closely guarded facility where American advisers have been based for several months helping Iraqi army and peshmerga forces battle Islamic State fighters nearby and preparing for an offensive to recapture the key Iraqi city of Mosul.

It was 13 years ago tomorrow that a U.S.-led coalition launched a series of airstrikes in Iraq, dubbed “Shock and Awe,” which triggered the beginning of the near-decade-long war. The legacy of the Iraq War and its resurgence in the national conversation, especially now in the midst of a particularly charged and vitriolic election year, are among the urgent and resonant questions of Youngblood (Atria), a smart and riveting new novel by Matt Gallagher, set in the fictional town of Ashuriyah. Raised in Reno, Nevada, and now living in Brooklyn, Gallagher is an Iraq veteran—his first book, Kaboom, is a memoir that grew out of the blog he kept during his deployment (and which was subsequently shut down by the U.S. military).


Unremarked upon in the coverage of the latest US military death in Iraq?  That the death occurred on the 13th anniversary of the start of the Iraq War.


One of the few Tweets noting today's anniversary:

Some might expect THE NATION, THE PROGRESSIVE, etc to note the anniversary but when you're celebrating a woman who voted for the Iraq War (Hillary Clinton), it's a little hard to note any reality.

Like Barack Obama's promise that there would be no US "boots on the ground."

Of course there are.

Or the President's promise that the US troops would not be in combat when they are.


The death also comes days after US Secretary of State John Kerry's ridiculous speech about the Islamic State in which he claimed ISIS was on the run.

The US government has been bombing Iraq with bombs dropped from war planes since August 2014.  The daily bombing continued today with the US Defense Dept announcing:

Strikes in Iraq
Rocket artillery, ground attack, bomber and fighter aircraft conducted 25 strikes in Iraq, coordinated with and in support of Iraq’s government:

-- Near Qayyarah, a strike destroyed an ISIL mortar position and an ISIL vehicle.

-- Near Sinjar, two strikes struck an ISIL tactical unit and destroyed an ISIL vehicle and suppressed an ISIL fighting position.

Task force officials define a strike as one or more kinetic events that occur in roughly the same geographic location to produce a single, sometimes cumulative, effect. Therefore, officials explained, a single aircraft delivering a single weapon against a lone ISIL vehicle is one strike, but so is multiple aircraft delivering dozens of weapons against buildings, vehicles and weapon systems in a compound, for example, having the cumulative effect of making those targets harder or impossible for ISIL to use. Accordingly, officials said, they do not report the number or type of aircraft employed in a strike, the number of munitions dropped in each strike, or the number of individual munition impact points against a target.


All those bombings as well as John Kerry's blowhard claims and yet no progress to brag of.

The Iraqi government targeting the Sunni civilians, under Prime Minister Nouri al-Maliki, led to the rise of the Islamic State -- a Sunni terrorist organization that got a foothold in Iraq because of this targeting.


And with the US assisting the Iraqi government today, what has changed?

That's right:  Nothing has changed.


Meanwhile, in the US, War Hawk Hillary Clinton continues to try to seize the Democratic Party's presidential nomination.

Hillary insists she's not just another ugly face but someone who's uniquely qualified to run -- or at least ruin -- the world.

She makes various claims of proximity to power. 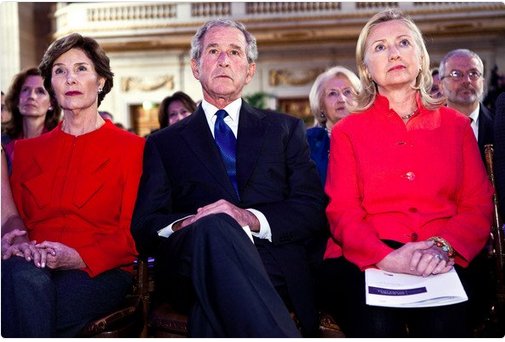 There she is sitting with War Hawk Bully Boy Bush -- she was his 'work wife.'  Seated next to them is his actual wife Laura Bush.  Unlike Hillary, Laura Bush did not vote for the Iraq War or to send young men and women to their deaths.


So are many of her supporters.


Take pure trash US House Rep Luis Gutierrez.  Today, the corrupt member of Congress most infamous for being a near dead ringer for Barney Frank did what?

The wife of Senator Bernie Sanders was in Arizona with activists registering opposition to  Sheriff Joe Arpaio's 'tent cities.'  Arpaio briefly spoke with Sanders who made her opposition known.

Because Jane Sanders is married to Senator Bernie Sanders and because Senator Sanders is vying with Hillary Clinton for the Democratic Party's presidential nomination, Luis Gutierrez rose from the gutter to spew an attack on her.


Harper Neidig (THE HILL) reports, "Rep. Luis Gutiérrez (D-Ill.), an outspoken advocate of immigrant rights and a supporter of Hillary Clinton, slammed Sanders for the meeting, saying she was not forceful enough with Arpaio."


As a general rule, family members are off limits during the campaign.


But when you're corrupt and a piece of human filth like Gutieerez -- and when you're supporting someone as vile as Hillary Clinton -- you can't help but go to the family.


Of course, Gutierrez's family is just as corrupt and filthy as he is.  In November 2010, Kim Geiger (CHICAGO TRIBUNE) reported:

listed as account manager, fundraiser manager and treasurer.
"Soraida Gutierrez resigned from her successful, well-compensated, Wall Street investment banking career last year to work full-time for the Gutierrez for Congress campaign," Douglas Rivlin, the congressman's press secretary, said in a statement. "In her capacity as treasurer and fundraiser, she meets regularly with FEC officials, so her role is hardly a secret and a matter of public record."
From 2004 to 2009, one of Gutierrez's daughters, Omaira Gutierrez, was paid $4,270 for managing the campaign's accounts. His other daughter, Jessica Gutierrez, was paid $600 in 2004 to assist with a fundraising project.