Hope you saw this. 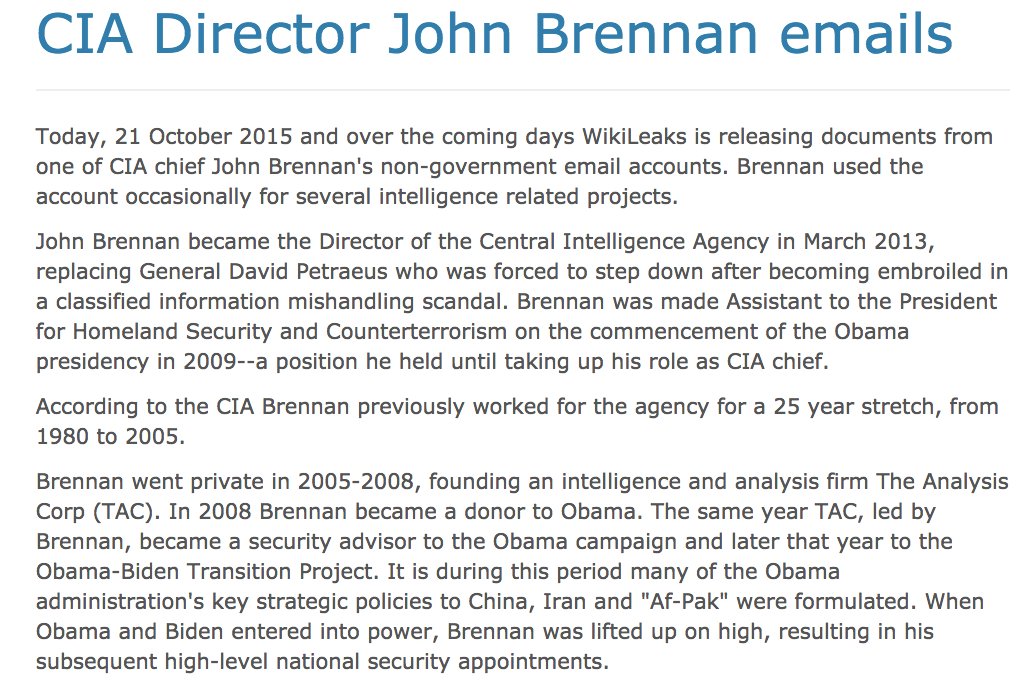 
And I hope you read Robert Parry's analysis of the self-congratulatory corporate media which includes this:


For one thing, you might have thought that professional journalists would have demanded proof about the predicate for this burgeoning “scandal” – whether the Russians really did “hack” into emails of the Democratic National Committee and Hillary Clinton campaign chairman John Podesta and then slip the information to WikiLeaks to influence the outcome of the 2016 election.
You have surely heard and read endlessly that this conclusion about Russia’s skulduggery was the “consensus view of the 17 U.S. intelligence agencies” and thus only some crazy conspiracy theorist would doubt its accuracy even if no specific evidence was evinced to support the accusation.
But that repeated assertion is not true. There was no National Intelligence Estimate (or NIE) that would compile the views of the 17 intelligence agencies. Instead, as President Obama’s Director of National Intelligence James Clapper testified before a Senate Judiciary subcommittee on May 8, the Russia-hacking claim came from a “special intelligence community assessment” (or ICA) produced by selected analysts from the Central Intelligence Agency, National Security Agency and Federal Bureau of Investigation, or as Clapper put it, “a coordinated product from three agencies – CIA, NSA, and the FBI – not all 17 components of the intelligence community.”
Further, as Clapper explained, the “ICA” was something of a rush job beginning on President Obama’s instructions “in early December” and completed by Jan. 6, in other words, a month or less.
Clapper continued: “The two dozen or so analysts for this task were hand-picked, seasoned experts from each of the contributing agencies.” However, as any intelligence expert will tell you, if you “hand-pick” the analysts, you are really hand-picking the conclusion.

You can say the analysts worked independently but their selection, as advocates for one position or another, could itself dictate the outcome. If the analysts were hardliners on Russia or hated Trump, they could be expected to deliver the conclusion that Obama and Clapper wanted, i.e., challenging the legitimacy of Trump’s election and blaming Russia.

And I'm not going to be part of mindless pile on.

Donald Trump is not my hero or dreamboat.

He is the president.

I'd like to see real reporting on what's going on and not this rage hysteria that the corporate media keeps fostering.

I want to hear about it.

I do not need this circle jerk of hysteria, however.

Tuesday, May 23, 2017.   Chaos and violence continue, The Mosul Slog continues, US troops continue to deploy to Iraq and much more.


KCEN reports, "Around 250 Fort Hood soldiers from III Corps are set to deploy to Iraq and Kuwait in support of Operation Inherent Resolve.  As part of the regular rotation of forces, III Corps will replace the 18th Airborne Corps in their mission against ISIS. The 18th Airborne is based at Fort Bragg, N.C."

Every day that should be the question: Why?

The US government kicked off this ongoing war in 2003.


Why are US troops still going into Iraq?

Why does the Iraq War continue?

We need to think and we need to ask questions.

And we need to hold people accountable.


Are we supposed to cheer Colin?

He was perfectly happy taking part in the death of civilians during Barack's presidency, remember?


Now he's offended because the number of civilians killed -- "alleged civilians," he tells us -- has increased?

It was a crime to begin with.


Whether it's increased, decreased or stayed the same, it was a crime to begin with.

Colin Kahl is War Trash and people need to think.

As civilian casualties in Iraq and Syria rise in the battle against the Islamic State (also known as ISIS), the Australian government should take all feasible measures to protect civilians during military operations and improve the transparency of its operations, Human Rights Watch said today. The Australian government is an active member of the United States-led coalition against ISIS and has dropped thousands of munitions on targets in Iraq and Syria since August 2014, but has been one of the least transparent members of the coalition.
On May 8, 2017, the Australia Defence Force (ADF) began releasing fortnightly reports on strikes taken by the Australian air force as a member of the US-led coalition, but more detailed reporting is urgently needed.

“The rise in reports of civilian casualties raises questions about the precautions and procedures in place to protect civilians,” said Elaine Pearson, Australia director at Human Rights Watch. “New fortnightly Australian defense reports are a welcome step, but the government needs to provide more detailed information to ensure greater transparency and accountability for its military operations in Iraq and Syria.”


22 May 2017 – With the liberation of Mosul imminent, the international community must maintain a dual focus on defeating the remaining Islamic State in Iraq and the Levant (ISIL/Da'esh) forces in Iraq, and on working towards post-conflict security and reconstruction, the United Nations envoy for the country told the Security Council today.

“The days of the so-called Da'esh caliphate in Iraq are numbered” and discussions on how to rebuild the country had begun, Ján Kubiš, Head of the UN Assistance Mission for Iraq (UNAMI), said in a “briefing to the Council, where he announced that UN Secretary-General António Guterres recently received the long-awaited submission of the Iraqi Forces Coalition's vision of a national settlement.

Moreover, the recent “Turkmen Forum” held in Baghdad served as an inclusive platform for the sharing of reconstruction visions.

Mr. Kubiš went on to stress that the imminent defeat of ISIL must also provide an urgent impetus to address the needs of minorities, especially their ability to return to their homes.
The return of all internally displaced persons to all liberated areas must be a top priority, as should tackling increasing incidents of kidnapping and paying sustained attention to upcoming elections in 2017 and 2018.

“National reconciliation can only succeed if it reflects the aspirations of the population, including women and youth,” he said, adding that women and youth, who make up more than half of Iraq's population, are key constituencies. With this in mind, he noted that UNAMI has convened seven separate forums across the country: in Basra, Erbil, Najaf, Diyala, Sulaymanyah, Kirkuk, and Baghdad, bringing together over 750 young participants from all Iraqi provinces.

Urging Baghdad and Erbil to leverage their joint efforts against ISIL and to address such issues as border disputes and building a “functional federation” based on partnership, Mr. Kubiš noted that senior officials in Kurdistan recently announced their intention to hold a referendum on the region's future later in 2017.
They had indicated, he continued, that their aim was to “show the world the will of the people” on the status of Kurdistan, rather than assert independence immediately.
Meanwhile, Turkey's Armed Forces maintained their relentless air attacks against PKK fighters, he said, citing Ankara's declarations that they would continue in order to deny sanctuary to the PKK. The Prime Minster had deplored the attack, he added.

Noting that the overall rule of law remained weak, Mr. Kubiš said kidnapping was becoming an increasing problem, recalling that the National Intelligence Cell had met on 11 May to discuss the link between terrorism and organized crime, including kidnapping. The international community must vigorously pursue accountability for crimes committed by ISIL in Iraq, he said.

Meanwhile, the issue of internally displaced persons remained critical, with some 700,000 people having fled their homes since mid-October, he noted. Hundreds of thousands of others remain in ISIL-controlled areas, suffering lack of food and water and often finding themselves caught in crossfire.


Mr. Kubiš concluded by reporting on his recent visit to Kuwait, saying he had met with officials there on the issue of missing Kuwaiti nationals and property. They had voiced concern about the lack of progress on the ground, he said, urging the Government of Iraq promptly to fulfil its obligations under that file.

What measures are in place to prevent a repeat of Nouri al-Maliki?


The persecution of Sunnis continues.


There is no national reconciliation.