Mark Zuckerberg really is a demon.  Let me note Isaiah's "Unfriend' from November 25, 2018. 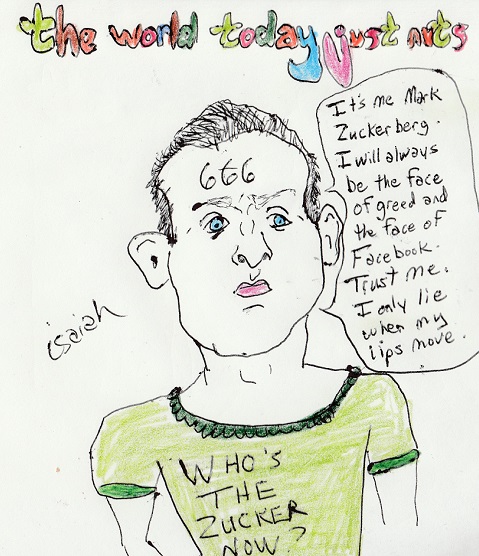 Again, he's a demon.  If you missed it, Joe DePaolo (MEDIATE) reports:

Facebook CEO Mark Zuckerberg has classified an Elizabeth Warren presidency as an “existential” threat to his company.
In leaked audio posted by The Verge, Zuckerberg — speaking with Facebook employees at company meetings — expressed deep concern that Warren would attempt to break up Facebook should she win the presidency. And were that to happen, Zuckerberg promised legal retaliation.
“[I]f she gets elected president, then I would bet that we will have a legal challenge, and I would bet that we will win the legal challenge,” Zuckerberg said. “And does that still suck for us? Yeah. I mean, I don’t want to have a major lawsuit against our own government. I mean, that’s not the position that you want to be in when you’re, you know, I mean … it’s like, we care about our country and want to work with our government and do good things.”

Zuckerberg went on to deem the threat posed by Warren as “existential,” and vowed not to let it go unchallenged.

THE VERGE has more about the audio.  Zuckerberg is out of control and he's the real threat.

Elizabeth Warren‏Verified account @ewarren 6h6 hours ago
Americans don't trust their government precisely because of this. My plan to end Washington corruption would ban members of Congress from serving on corporate boards and owning or trading individual stocks. No exceptions.
263 replies1,151 retweets4,700 likes


It should apply to their family too -- I'm talking Hunter Biden, yes.

sarah juarez‏ @sarahjuarez83 1m1 minute ago
Replying to @GarthVader777 @Floridaliberty1 @CNN
BS. Hunter Biden sat on the board of a Ukrainian energy company for $50,000 a month despite having no prior experience in the industry. VP Biden was managing the administration’s Ukraine policy & pressured the Ukraine government to end a corruption probe into the company.
0 replies0 retweets0 likes

Tuesday, October 1, 2019.  Protests in Iraq over corruption, in the US Joe Biden defenders continue attempting to defend and/or deny Joe's unethical conduct.


Protestors demanding government action on postgraduate unemployment were hosed down with Iraqi security force water cannons on Wednesday, in an act condemned by a national human rights commission as an act “against freedom of expression.”
Iraqi master’s degree and PhD holders have been protesting outside ministry buildings in Baghdad since June, calling for measures to ease unemployment among postgraduates, including an increase in public sector jobs.

A video recorded by a protestor and published on social media on Wednesday shows water cannons being used to disperse protestors in front of the Council of Ministers in Baghdad.

Protestors, some of whom can be seen wearing graduation sashes, are knocked to the ground by the sheer force of the cannons. Other protestors rush to their aid.

“This is how Iraqi postgraduates are being treated in Iraq,” said the protestor recording events, who proceeds to call on Muqtada al-Sadr, the United Nations, the European Union and the entire world to come to their assistance.

Hundreds of Iraqis protested in Baghdad’s Tahrir Square on Tuesday to express diverse, long-brewing grievances, including, a lack of basic services, rampant corruption, and unequal treatment within the Iraqi Army.
Civilian protestors expressed anger about the Friday dismissal of Iraqi Army commander Lt. Gen. Abdul Wahab al-Saadi, credited with the defeat of the Islamic State (ISIS) in Iraq, from the Iraqi Counter-Terrorism Services (ICTS).  Civilian protestors holding pictures of al-Saadi disapproved of his subsequent transfer to the Ministry of Defense.
“We don't want this is corrupt government,” civilians chanted, while others extended their discontent to the parliament and presidency. “All are corrupt equally,” a protestor said.

Mustafa Habib‏ @Mustafa_Habib33 1h1 hour ago
Breaking: All the world expected big protests in #Iraq this summer, but did not happen because they want to give the govt a chance despite the continued poor services, but after the govt's decision to remove Saadi, the protests began today from #Baghdad & may be the biggest.
/>
0:27
0 replies10 retweets9 likes


Here are some more Tweets about the protest.

And it's not just Baghdad.

Adam Lucente‏ @Adam_Lucente 3h3 hours ago
There are protests in Iraq today in Baghdad, Basra and Missan >
0 replies2 retweets2 likes

The heavily fortified Green Zone remains off limits to the average Iraqi.  The home of the US fortress that houses State Dept personnel and others was again zoned off from the Iraqi people today.

Iraq's premier has said for the first time that his government had "indications" Israel was behind some attacks on paramilitary bases this summer, but stopped short of making an explicit accusation.
Hashd al-Shaabi, otherwise known as the Popular Mobilization Forces (PMF), has blamed the series of explosions at its bases and arms depots on Israel and the US, but the central government had so far said it was still investigating.

In a first, Prime Minister Adil Abdul-Mahdi told Al-Jazeera television in an interview aired Monday that those investigations were nearing a conclusion.


AFP fails to note that the first public finger pointing at Israel for these bombings took place in July and was led by the Israeli press (see the July 30th Iraq snapshot).  In addition, the US government has whispered to the US press that Israel is behind the attacks (see the August 23rd snapshot).  Seth J. Frantzman (JERUSALEM POST) observes:


Iraqi Prime Minister Adel Abdul-Mahdi said that “investigations into the targeting of some Popular Mobilization Units (PMU) positions indicate that Israel carried it out,” in his first direct comments blaming Jerusalem. This is the first time he spoke so clearly about a series of mysterious attacks since July that have targeted munitions facilities of the PMF. The PMU are a group of mostly Shi’ite militias, some of which are closely tied to Iran’s Islamic Revolutionary Guard Corps.
In the past voices in Iraq have sought to blame Israel but have been reticent to do so clearly. Elements within the PMU have instead held the US responsible, claiming that the US allowed Israel to carry out the attacks. These reports appeared in foreign Arabic media sometimes, but there was not a robust response because the PMU didn’t know what the best response was. So why would Abdul-Mahdi, who faces many challenges at home, decide to blame Israel now?
It appears that the Iraqi Prime Minister is blaming Israel at this juncture because he is being targeted for criticism for removing a key member of the Counter Terrorism Service (CTS) named Lt. General Abdul Wahab Al-Saadi. Al-Saadi was a popular deputy commander of the CTS, Iraq’s most elite unit. He played a key role defeating ISIS. However he was suddenly sidelined last week and the Prime Minister is being criticized across the political spectrum. However Abdul-Mahdi’s office has said the decision is irreversible and has said Al-Saadi must adhere  to it. In addition rumors have been spread against the commander, suggesting he visited foreign embassies. The Prime Minister sought to blame the CTS for the decision on Monday, suggesting that the chief of staff wanted Al-Saadi out of the way.


Turning to the US where the race for the Democratic Party's presidential nomination continues.


But it's not just Elizabeth.


The always ridiculous opportunist Matthew Dowd (conservative hack who tries to pretend he's converted to the center) rushes to save Joe from himself.

Matthew Dowd‏Verified account @matthewjdowd 1h1 hour ago
This can and is simultaneously true: what Hunter Biden did was unseemly and possibly unethical, and there isn’t an ounce of evidence that Joe Biden did anything wrong or untoward.
17 replies27 retweets215 likes

No, that can't be simultaneously true, you War Hawk idiot.  Joe did to things "wrong and untoward."  He allowed his son Hunter to profit from the position Joe held.  (Joe also let his brother James do the same.)  That is unethical.  For Dowd to be correct about "there isn't an ounce of evidence that Joe Biden did anything wrong or untoward," Joe would have to insist today that he's only just now learning about the money Hunter raked in from Ukraine and from China or that James raked in from Iraq.  These deals took place while Joe was vice president.  They were known.  Joe should have told his family to stop grifting.  He didn't.  And they continued to grift.  That's unethical and, yes, it is untoward and, yes, it is wrong.


BREAKING: After Joe Biden claimed that he never discussed his son’s foreign business dealings with him, A photo surfaced, from 2014, showing the former VP and his son golfing with a board member of the Ukrainian company that paid Hunter Biden $50k a month. This. Is. Corruption.

Why did that happen?  Because Hunter was being paid for access to the White House.  That's unethical.


Biden’s corrupt dealings in Ukraine and those of his son must be investigated, and the time has come for him to drop out of the presidential race.
While Biden served as vice president, his son Hunter was unaccountably making $50,000 a month “consulting” in an industry with which he was totally unfamiliar ­(energy), in a notoriously graft-prone country where he didn’t speak the language (Ukraine). Hunter made similarly sketchy deals with China.
President Trump’s phone call this summer with his Ukrainian counterpart may have been ill-advised, but it simply didn’t rise to an impeachable offense. Meanwhile, the American people deserve to know the truth about the Biden family’s lucrative dealings with other countries during the Obama ­administration.

Kat's review of Stevie Nicks' STAND BACK "Kat's Korner: Just an invitation would have been just fine" went up Sunday.