So Bernie betrayed us and he betrayed us long before we realized.  He would not let the grassroots be active during the campaign.  He always pretended to love us and want us but the reality was he sneered at us.

Bernie is a damn fake ass.

If Joe Biden resigns tomorrow, it better be someone else.  I'm done with fake ass Bernie.

The only thing more fake ass than Bernie?  Norman Solomon.  And he just wrote a piece on Bernie delegates.  Are you telling me Norman isn't one?  I'm surprised if he's not.  IF he is one, he should have disclosed that in his piece.  (He was a Barack delegate in 2008 and failed to disclose that on air repeatedly.)

The Justice Department moved Thursday to drop the criminal case against former National Security Adviser Michael Flynn. Flynn pleaded guilty in 2017 to charges of lying to the FBI, but earlier this year, said he wanted to withdraw his plea because he was pressured into giving it. The DOJ sided with Flynn, deciding to drop his charges "after a considered review of all the facts and circumstances of this case, including newly discovered and disclosed information." Flynn was fired shortly after it appeared he lied to Vice President Mike Pence and the FBI about the nature of his conversations with then-Russian Ambassador to the United States Sergey Kislyak.

Good.  The charges should be dropped.  Ruth's "General Flynn" went up earlier and that is just her latest post.  Ruth has covered this story all along.  Flynn was railroaded.

Thursday, May 7, 2020.  Iraq has a new prime minister while the United States still has its Joe Biden problem.


"I believe Tara Reade, yes I do," Lucy Flores told PLANET AMERICA (Australia's ABC).  Tara has stated Joe Biden assaulted her in 1993.  And the mainstream media has largely ignored the story.  Kelly McBride weighed in with her conclusions on why NPR waited forever to cover the story.  The media's reluctance to cover it has allowed some like hypocrite Alyssa Milano to argue that the claims must not be true because the press isn't covering them and it allowed the attacker -- and his attack squad -- to set the terms of the conversation.  Why?  The people who set the terms of the conversation are people who experts in the topic.  Twitter is full of Tucker Carlson's applying 'standards' that are not standards.  As we noted yesterday,  it was C-SPAN that brought on RAINN's (Rape, Abuse & Incest National Network) vice president Heather Drevna.

Heather Drevna: What I can say is we shouldn't dismiss someone's allegations of assault merely because their story has changed or what they have told audiences has differed at times.  You need to take into account her explanation for why the details she described last year don't all match what she's alleging now, why the complaint might not match what she's alleging now.  You also need to take into account that she told some friends and family members at the time of the alleged assault.  It's not unusual for a survivor to take years to process the trauma that they have experienced and just because they've not come forward publicly immediately after events may have occurred doesn't mean that they did not happen.

Survivors are being smeared by idiots who know nothing about the topic.

Reade’s case is made stronger than Ford’s by the existence of corroborating witnesses. Her mother called into a television show hosted by Larry King in 1993 to say her daughter had problems with a prominent senator. Reade’s brother as well as a former neighbour named Lynda LaCasse, a committed Democrat and Biden supporter, recall having been told about the assault not long after it happened. Given these facts, it would be hypocritical for those who condemned the judge to maintain their support for the senator, a fact that Fox News and right-wing media are likely to highlight incessantly in the six months leading up to the presidential election.

Biden is a thoroughly mediocre candidate. He underperformed in previous runs for president, has articulated no vision for change, seems unable to open his mouth without making a gaffe, and looks aged and unsteady. His closest competitor in the primaries, Bernie Sanders, a year older at 78 and recovering from a heart attack, came across as a bundle of energy in comparison. Democrats turned to Biden because he was well-known and well-liked, a safe pair of hands, their best bet against the existential threat represented by Donald Trump. Those hands now look far from safe.

If you offered America nothing but "I'm electable" and then it really becomes obvious that maybe you're not, what do you have to offer?  Not much.  Chris Kahn (INDEPENDENT) explains:

Democratic hopeful Joe Biden's advantage over US President Donald Trump in popular support has eroded in recent weeks.
Mr Biden seems to be paying a heavy price for a lack of visibility with voters during the pandemic, according to a Reuters/Ipsos poll.
The opinion poll conducted on Monday and Tuesday found that 43pc of registered voters said they would support Mr Biden in the November 3 presidential election, while 41pc said they would back Mr Trump.
Mr Biden led by six percentage points in a similar poll last week and by eight points in a poll that ran from April 15-21.


Democrat Rebecca Parsons is running for the US House of Representatives in Washington's sixth district.  She Tweets:


#JoeBiden must withdraw. #TaraReade's allegation is part of a pattern of behavior. 7 other women have accused Biden of inappropriate touching. He's on video invading the space of women and girls. We MUST defeat Trump. We do that by defending our moral standards. #BidenDropOut 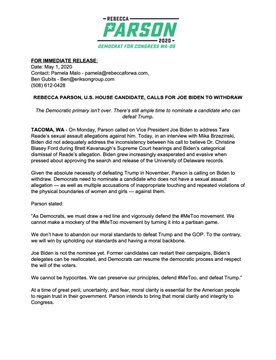 Jess Scarane is campaigning for Joe Biden’s old Senate seat with a striking message for a Delaware Democrat: She believes his accuser, Tara Reade.
Scarane, who said she is a victim of sexual assault, tweeted in March that when she listened to Reade talk about her claims, “the assault I experienced as a teen at my first job came rushing back. She was telling my story, too. Almost word for word.” She has called on Chris Coons, the incumbent she is trying to oust and a top Biden ally, to support an investigation.
“I debated sending the tweet that I first did, probably for hours,” she told POLITICO. “Because I was not only exposing my own story, but I think there’s still a lot of fear and potential ramifications by just saying this deserves to be taken seriously.”
Scarane is one of more than a half-dozen progressive House and Senate challengers — almost all of them millennials — who have said publicly that they believe Reade’s claim that Biden sexually assaulted her in 1993 when she worked as his Senate aide or otherwise spoke out in support of her. Though most are long-shot candidates with limited resources, their remarks could stoke division at a time when Biden is trying to unite the party’s warring factions. Their stance also risks exposing a rift between some younger and older Democrats as Biden works to strengthen his position as the Democratic nominee.

There is another strand, however, those who pretend to support survivors until one of their own are accused.  This craven group then falls silent.  Ingrid Jaques (DETROIT NEWS) reports:


Gov. Gretchen Whitmer once wrote, “Sexual harassment is not a partisan issue and is unacceptable no matter who does it.”
That comment, from a November 2017 tweet before Whitmer became governor, has since been deleted from her personal Twitter account.

A screen capture of a November 2017 tweet from Gretchen Whitmer. (Photo: Screenshot)
And so has the sentiment behind it, apparently.
While Whitmer has had no problem calling out sexual harassment and assault when a Republican’s reputation was at stake, she isn't concerned when the alleged bad behavior is exhibited by Joe Biden, who is eyeing Whitmer as a contender for his running mate.


Whitmer’s statements are consistent with a set of talking points circulated by the Biden campaign to surrogates, which incorrectly cite an inconclusive New York Times investigation as proof “this incident did not happen.”
Survivors and advocates have taken issue with Whitmer’s response, calling it a politically convenient rush to judgment that undercuts the #metoo movement. The case is not closed, they argue, noting that media outlets continue to uncover more information and documents that could shed light on what happened have not been made public.
“I think to see any person who comes forward diminished is a disservice to every single victim who’s still holding onto their story and future victims who should be able to tell their story,” said Huff, who says she was raped more than a decade ago but never named her assailant because he was well-respected and she feared no one would believe her. “When people ask why victims don’t come forward, Whitmer’s response is why.”
It’s a sharp contrast from the way in which Whitmer was received seven years ago when, during a speech on the floor of the state Senate, she shared that she’d been raped as a college student. Whitmer’s goal at the time was to “put a face” on the people who would be affected by a controversial bill to ban private insurance plans from covering abortion. She didn’t succeed in changing any votes, but she has said her words did encourage more women to come forward with their own stories.
Whitmer has since become somewhat of a local face for the #metoo movement, speaking out on sexual harassment at the state Capitol and quickly ousting a former campaign manager who’d been accused of “inappropriate behavior” with former co-workers. Last year, she concluded her speech at a campus sex assault symposium at Eastern Michigan University with this message for survivors: “I see you, I hear you, I believe you … I carry you in my heart every day, and I’ll never stop fighting for you.”
Huff and two other survivors with whom Deadline Detroit spoke said they felt Whitmer should have stayed silent or called for a more robust investigation before shooting down Reade’s claim.


People are calling out Gretch The Wretch's inconsistencies.  And while she refuses to believe Tara Reade, it should be pointed out that there are many who are noting that her own story remains very short on details.  The doubt she's raising about Tara?  It's creating doubts about her own claim -- a claim she used to rise to fame and political prominence.  You reap what you sow.

Turning to Iraq, THE WEEK notes:

Early Thursday, Iraq's Parliament selected Mustafa al-Kadhimi to serve as the country's new prime minister. Iraqi officials have said the 53-year-old former intelligence chief is acceptable to both the United States and Iran, The New York Times reports. Iraq has been without a prime minister since late last year, when Adel Abdul Mahdi resigned amid anti-government protests; he has been leading a caretaker government. Kadhimi has already met with protesters, taking a different approach from the previous government, which at times used the military against demonstrators. In addition to social unrest, Kadhimi will also have to deal with the coronavirus pandemic, which has locked down Iraq, as well as historically low oil and gas revenues.


Iraq has been searching for a new prime minister for six months now.  The most recent prime minister had been forced out back in November but remained in the post in a 'care taking' role. Mustafa is the third person to be named prime minister-designate during this period.  Ahmed Rasheed and John Davison (REUTERS) note, "Prime Minister Mustafa al-Kadhimi, Iraq’s intelligence chief and a former journalist, will head the new government. He will begin his term without a full Cabinet, however, after several ministerial candidates were rejected."  What they fail to note?

Thus far, the Constitution has not been followed.  That's one of the many reasons that Iraq does not progress -- the government is repeatedly headed by someone who can't even form a Cabinet that gets Parliament approval.